Young Guns Under The Influence of Tom Arkus and Mark Potozcny

It has been a treat to see the Halahan brothers get better and better every time I’m out in Pittsburgh. I mean—these boys are already phenomenal, but they just keep progressing at an exceptional rate. I think it boils down to the old adage of, you are the company you keep. Along with the Halahans having the greatest parents around, who are 110% supportive, they’ve also been following in the footsteps of Pittsburgh trail veterans Tom Arkusauskas and Mark Potoczny. Good thing Tom and Mark weren’t playing some type of sportsball, or boofing fentanyl in their spare time. Instead, they have been working hard building Hazelwood trails, and that work ethic has definitively been passed onto the Halahan brothers.

Tom and Mark chatting with the boys at their home spot; 9 Acres.

tr.v.in·flu·enced, in·flu·enc·ing, in·flu·enc·es1. A power affecting a person, thing, or course of events, especially one that operates without any direct or apparent effort: the pervasive influence that social media has on modern life; young people falling under the influence of some seasoned trail riders.

2. Power to sway or affect based on prestige, wealth, ability, or position: used their influence to make them hit the next line.

3. A person who exerts such power: My parents considered my friend to be a good influence on me and my shredding.

Shane, Nate and Luke... this is pretty epic, like a planetary trio conjunction that only happens once in a lifetime.

Tom giving the boys some sound advice at POSH Woods.

When was the first time you met the family?

This one is hard to recall… I met the whole family at a Jam in Pittsburgh about 8 years ago. I remember Mike Halahan approaching me just to say whats up and that he supports our endeavors.

Riding the with boys is an interesting reality check. The amount of progression I’ve seen in the past few years makes feel that I really sucked as a rider when I was younger. At the same time I get a lot of joy riding with them because it's so damn fun pushing them to run lines that they aren’t used to.

At what point did you realize the boys are hooked on trails?

That came to reality when the boys started digging jumps at their house when the family bought property a handful of years ago. Also, the addiction became real a few years ago when they cracked the first successful laps at Hazelwood.

What do you feel is the motivation for the boys to keep riding trails?

I believe it’s not giving a fuck what BMX has to offer, they do their own thing, they ride what they like, no real responsibilities to sponsors. I think that is the motivation behind it.

Who do you think inspired or influenced their riding style?

I'll go ahead and say us the Pittsburgh locals, we are trapped in a time capsule here in Pittsburgh. I'm sure they have gotten a lot of influence from traveling as well.

Nate in front with a stanky leg table and Tom very close behind.

Have they inspired or influenced you as well?

The boys inspire me to keep riding and keep the flow I have at the trails. It's very rewarding having fresh blood at Hazelwood. Mark (Potozcny) and I have been relying on international friends coming every year. Now I feel like there is a good balance with the Locals.

After watching the boys progress all these years, what do you think the future holds for them?

The future is bright for them. It all depends if they stick with riding trails, which I believe they will since that is the path they are on currently. I really think the Boys will out do Hazelwood and build something bigger. I keep encouraging them to one-up the Hazelwood trails. Our shit is old and out-dated, we just make modifications now days, Trails should always progress if you have time and energy… but, you know life catches up to you really quick.

What was one memorable or proud moment with the Halahan's?

This memory is kinda fresh in my mind. We were at POSH this past Fall and I wanted the boys to run a train on one of the lines for a photo/ video clip, the timing was so fresh and good that I couldn't hold my composure and started screaming with joy once I seen the flash go off and all three of them where in one shot.

Nate Halahan with the no-hander, and Luke Halahan below, at Catty Woods. I don’t know if they learned this from Tom Arkusauskas and all the timing jobs he’s done on cars, but they literally got this straight away.

"Riding the with boys is an interesting reality check. The amount of progression I’ve seen in the past few years makes feel that I really sucked as a rider when I was younger."

Mark telling the boys the “back in my day” suicide no-hander story.

When was the first time you met the family?

The first time I can remember riding with the Halahan’s was at Imperial Skatepark. I had heard about them from a friend but was still pretty shocked at how good they were for their ages. I’m guessing that was back in 2011.

There is always a good energy riding with the boys. Riding with them really puts things back in perspective and helps you realize why we all got into this, for fun! Also it’s hard to have an ego when a ten year old is showing you up.

At what point did you realize the boys are hooked on trails?

They were hooked really early and had a regular presence at Josh Pekich’s trails. Their dad Mike always insisted they helped out and did their share building if they were going to ride. They helped convert a long low double into a rollable step up double. After looking at it, they said it looked like the curves of a Ferrari so it was dubbed the “Ferrari Roller”. I think at that point they were hooked on the creative process of trails.

What do you feel is the motivation for the boys to keep riding trails?

I think they have a true love for building and riding trails. Trails riding isn’t the most glamorous side of the sport. There isn’t a big external payoff for all those hours spent dialing. You gotta truly love it and these guys are all in.

Who do you think inspired or influenced their style?

They are carrying on a long tradition of trail riding here in Pittsburgh. There is some heavy roots in the racing and trails scene here. Through the years they picked up a lot influences from Robinson Trails, Monroeville, the trails at my parents, and Hazelwood. I’d like to think the Welcome Jams that my brother and I threw at my parents had a good effect. Their dad Mike once said after being at a jam he wanted them to always be part of the scene rather than the stars of it. Now the boys run their jam called the Next Generation Jam that is their way of getting the younger riders together and stoked on BMX.

In the footsteps of the trail wizards: Mark Potozcny, Tom Arkus in the lead with Luke & Nate Halahan close behind and special guest, Cam Nicols, in the back.

"They inspire us daily. The trail world is full of salt and some youthful energy helps keep the stoke high and the attitude positive."

Have they inspired or influenced you as well?

They inspire us daily. The trail world is full of salt and some youthful energy helps keep the stoke high and the attitude positive.

After watching the boys progress all these years, what do you think the future holds for them?

With the skill, creativity, and positive attitude the boys possess—they could do anything. They could go on to be pro riders. They might be could be course builders and designers. They might just get jobs and continue the list of working class shredders here in the ‘Burgh.

What was one memorable or proud moment with the Halahan's?

It’s been really rad seeing them progress over the years. Seeing them make it through the mains at my parent’s house or hitting the Science Jump for the first time are up there. But seeing them make it through the Big Foot line at Hazelwood was the most memorable moment. They actually went through a phase where their dad wouldn’t let them come out. He brought them to the trails but asked them to ride the smaller line. Nate, who was 11 at the time and riding a 16 inch, went for one of the bigger lines called Big Foot. He ended up racking a hip and getting knocked out on a step-down hip. I think at the time he simply didn't weigh enough to ride jumps of that size. His goal was to hit one of the bigger jumps called the Moon Jump. He told his mom he wanted to jump the Moon and she didn’t really know that was a real jump. She thought he was just being funny. When their parents talked about it later they realized all along Nate was gunning for this jump the whole time. A few years later both Nate and Luke fire the whole line out no problem. They almost made it look too easy that time.

They told me the classics never go out of style… and it’s true, they don’t, they really don’t. Nate Halahan with a classic toboggan at a classic spot; POSH Woods.

And there you have it, The Halahan Brothers…

3,292 miles traveled over a few months, 52 hours of driving, 87 gallons of diesel burned, 1 speeding ticket and many, many tolls... and some great memories and times. Thanks to Tom Arkus, Mark Potozcny, All the Halahan's, the Pittsburgh locals. Thanks for your support — I appreciate it. - David Leep

Special thanks to VINYL BMX

"You are the company you keep" - More Info 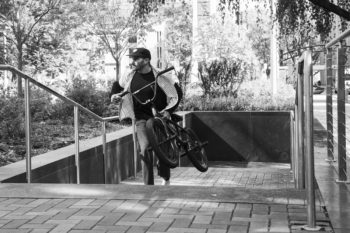 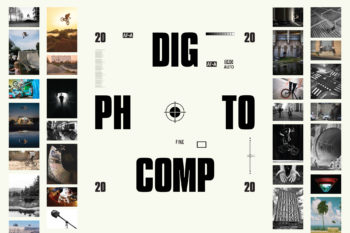