Next up is France's very own, Hadrien Picard; the main photographer for Soul BMX magazine in their print days, the man behind the SOSH Urban Motion contest series, and much much more. Hadrien knows more than most about dealing with the ever evolving world of BMX media and representing our world in the best way possible.

Hadrien Picard - on the job, 2017. Photo by Charles Séguy

How has your day-to-day work at home in France changed since the last issue of Soul was printed?

It had already changed before. I’d love to be a full-time BMX  photographer and director, as there are in skateboarding, but our industry is too small, so even if I never thought about it. Years ago  I slowly began to shoot different subjects than BMX, quite some time before the end of the print era of Soul.

Right now I’m filming as much, if not more than shooting. I’ve never really wanted that, it’s just there is more demand for this. Which is ok for me, I love directing as much as shooting photos .

Was there a point when you noticed that BMX photography and print was becoming less relevant to the riders even before the avoidable demise of print?

Hmm, good question. If you compare when print was the only media, obviously it’s less revelant now.  I think it came with digital era / web era. On one side you have more and more people shooting photos thanks to digital (DSLR and smartphones), on the other side there are now a lot of ways to share the photos. So everyday now we see maybe a 100 times more photos than we used to. There's so many things to look at, so when you do see a genuinely awesome photo, you actually have less time to look at it. And it's the same thing for the news. Since now it’s 24 hours a day, news stays with us for a shorter time. Bush Jr, for example has made things 10 times worse than the Watergate; like showing fake proof in order to invade Iraq, but since people now see so much information, they just forget and forgive almost everything.

Tell us more about your current job setup and how you’ve had to adapt to stay employed.

Now the competition is worldwide for the BMX media, so only the big one can survive. Web competition is like Poker - winner takes all! Before there were 1 or 2 strong BMX media outlets per country, but now in France for example ,we don’t make any money with Soul at all.  Brands prefer to put their money on Google ads or Facebook, be their own media or regram for free your photos (without even asking... but by crediting you, I’m so lucky, haha).

I’m still super happy to work here and there in the BMX world, thanks to a couple of brands that still support me and BMX in general, like Red Bull and recently SOSH, that even if they are big corporate brands, understand and respect our culture.

I now work 80% of the time outside BMX, working with different production companies and  agencies in Paris, shooting really different things from cars, to shows, to fashion. I didn’t and still don’t have a clear plan about where I want to go in my career. I just take the opportunities that are on my road. I always say if you do a good job and are not an asshole then maybe some cool stuff will happen. But I don’t want to try to be what I’m not. I don’t care if I’m not the coolest or most fashionable guy ever.

Hitching a ride with Thomas Caillard. Photo By Hadrien Picard

Do you get the same satisfaction from what you do now compared to shooting BMX in the print days?

Hmm, maybe not, indeed.  There were a couple of photos I was stoked on, plus there is this feeling when you’re happy about the pic and stoked for the rider that he pulled his trick.

Back when I started shooting for Soul in 2004, Manu Sanz was still a the top of his game and I was kind like a Padawan trying his best. So there was a nice emulation between him and I, and I was super stoked to just be able to shoot BMX photos. When I started shooting photos I was really shy; there was no digital yet, so it was hard for me to go talk to a rider I didn’t know about shooting photos.

Do you think this current climate will have any negative impact on recording the history of BMX?

For sure.  Instagram is cool, it makes people see the average day of the rider, and he can master his communication. But nothing lasts. It’s all fugazi, ha, ha. You forget things that were only two weeks ago.  On both sides it’s bad for the history of BMX - photos are less good and don't last as long. The average BMX photos today are already not even as good as they used to be.

BMX needs to have its' own culture and without history we won’t hold our own; we will still be a lesser subculture of skateboarding, which is sad. I think BMX has its own place, between the streets of the city and the paths of the forest. We are one of the only cultures which is both urban and rural.at the same time.

Would you have any advice  for a young  up and coming coming BMX photographer today?

Be versatile. You’re not gonna be a full-time BMX photographer. But it’s one of the best schools ever to be good in photo. You have to master flashes like in a studio, timing, stress, you shoot documentary style... honestly after that, a lot of thing will look easy. Cars, so called 'lifestyle' shots, babes on a sunsets etc. Even the best guys shoot everything now.

Hucker shot for Red Bull in 2016 as part of the DIG/THIS IS OURS 'At Home' Series where Hadrien covered photographic AND filming duties.

"So everyday now we see maybe a 100 times more photos than we used to. There's so many things to look at, so when you do see a genuinely awesome photo, you actually have less time to look at it."

Do you think the great photographers like Dolecki, Ricky Adam , Jeff Z (and many more of course) get the credit they deserve for what they’ve contributed to BMX through print?

Not at all. I hate to sound like a old guy saying "it was better before" but kids now don’t know their history, and like I said, I think photographers and magazines played a big role in that. So now young kids don’t even know who these people are. It’s the same for riders, kids don’t know the basics either, ha ha. "Who is Mike Aitken?", is something I often hear.

Sadly, photos will look always better in print, that’s why photographers are less known now than what they should be, even if they have shot some iconic photos.

I already said this- without always staying in the past, BMX needs to know it‚ history. And for that, skateboarding is a good example. There are always young kids popping up, but at the same time people like Caballero or Daewon Song are still shredding and super-respected. We need to do the same in BMX. It has already started and I think it’s super cool. I’m proud of being a BMXer!

Are there and closing thoughts that you'd like to add?

I have the feeling the quality of photos and video in BMX is stagnating these days. It’s a bit sad. I’d love to see crazy projects like before, but I’m less amazed by what I see now.

Also, the media world is changing super-fast and photography too. I love Instagram for many things, but one thing I hate is that everything is dominated by how many likes you’ll have. People tend to value others by how many followers they have. I think it’s dangerous. I have the feeling a lot of things look the same because it’s the easy way to have likes and followers - vertical photos so they look bigger on your phone, sunsets, babes, GoPro pics with arms opened etc etc... I hate that. Do your own thing. It can be cool, even if it gets less likes than a sunset on a beach:).

"I’m still super happy to work here and there in the BMX world, thanks to a couple of brands that still support me and BMX in general, like Red Bull and recently SOSH, that even if they are big corporate brands, understand and respect our culture.​" 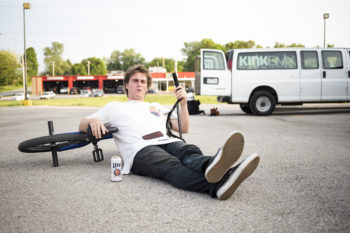 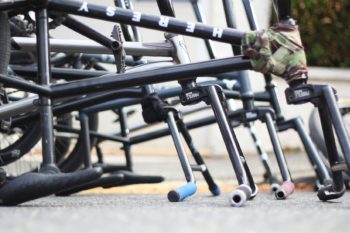