It's obvious Chase Hawk's riding style is one that is often imitated and held in high regard. And part of his evolution to becoming one of today's revered style G-O-Ds comes from the fact that he's been fortunate enough to call Austin, Texas home for his whole life, and by extension, the T-1 ramp a local riding spot for fourteen years.

With an ever-changing incredible layout of of never-ending line possibilities, transitions made for the boost button, good company and an energy that infects one to turn it up a few notches any given day, it's not hard to see how the T-1 ramp helped nurture and cultivate Chase into the rider, and person he is today. Don't just take my word for it; read on and see for yourself.

Like clockwork, just as the sun started to dip behind the horizon every day during the etnies filming week, the level of riding always seemed to go up a few notches. Chase taking care of another hot maneuver- another day, another good session.

"It’s every kid’s dream to have a ramp in their backyard."

When was the first time you rode the ramp?

Right around the time it was built. The day that Joe moved into the building, there was Skatelite and wood being brought into the backyard. I rode it a couple of months after it got built, when it was just a mini ramp with an eight-foot extension on the far right-hand side, and the opposite side a vert wall. It was the first ramp I ever rode with Skatelite on it. One of the first times I went was with Corey Martinez, when he was driving through. I remember he got a couple of clips there- it might have been in a Standpoint video? I was still living at my dad’s, and moved out the following year. It was the beginning of me riding more ramps. It was the biggest ramp that I had ridden at that time. I was used to riding stuff that was built worse. That thing was a tank. It was one of the better seven-foot transitions I’ve ever ridden.

What are some of your best memories you have from riding there?

I’ve gone through waves with that place. Sometimes I’ve ridden it for months straight, then sometimes I didn’t ride it for over a year. In the last renovation that was done, I had only ridden it three times. I usually like to ride in the morning a lot of the time. Most of the sessions happen in the evening; usually when I end up over there I had been riding all day, I was tired and whatnot. The fakie high-air jam was a lot of fun. A lot of people talk about that as one of the more memorable sessions. It was a lot of fun. A lot of the SXSW shows. A few of them, the bands set up where people are riding at the same time- those sessions were heavy.

Multiple hours, a lot of sweat, cussing, and tries later, this wallride to backwards icepick grind to fakie finally came together for Chase. It's safe to say this was probably the most tries he has ever had to do to get a move at T-1.

"I remember after riding it consistently for the first couple of years, my riding style changed completely."

Being that you haven’t ridden the ramp much recently, how was it riding with everyone who was around for the etnies sessions every day for a week?

I was a little worried about it at first, since I didn’t have any real plan for what I wanted to film. Not saying you need to, but I like to have an idea. Just having that type of crew there helps the situation. It’s one of those things where everyone feeds off each other. You need that in a situation like that. It’s hard not to say that the etnies filming week weren’t some of my favorite sessions, because they were.

What were some of the craziest riding sessions over the years?

When it’s not necessarily a lot of people there, but everyone on the deck is pushing it. Those are the sessions you remember. It’s not one particular thing, more like a few hours of intense riding. It’s an energy created that only gets bigger and crazier. At the end of it you have Joe blasting 12 feet, and it’s completely dark out. When you roll up and it’s like Joe, Clint, Matty and Nutter, all those dudes, you know you’re walking into a heavy session.

"If you spend a lot of time at T-1, it breeds a certain type of rider."

What was your favorite part of the ramp?

I don’t know if I’d still want it this way, but when the ramp was broken up and it had the skate mini in the corner, there was a point that a weird roller thing connected it from the mini into the skate mini. It created all these weird transfer lines. Joe didn’t like any of it, and that’s why it wasn’t there anymore. That era was probably when I spent the most time there. It was where I learned how to skate, like rolling in, grinding and all that stuff. I would sometimes go there just to skate.

After all the years riding T-1, what’s the one thing you’ve taken away from there?

It’s awesome that how long Joe has been able to make it work, and all the renovations the ramp has gone through. That ramp has seen some shit. That’s the most special part of it. It’s inspiring for anyone- bike riders, skaters. It’s every kid’s dream to have a ramp in their backyard. It’s even a bigger dream to have a ramp of that caliber right out your back door. The most special part of it is the ramp itself.

Pocket Ruben wallride, while Ruben watches from the deck above, on a first-time, but short-lived permission wall.

Being an Austin local, how did the ramp affect you?

I remember after riding it consistently for the first couple of years, my riding style changed completely. It is where I got comfortable with being in the air. I never really experienced that ten-foot hang time; it was the first place I felt it. I don’t think I’m the only one. A lot of people learned to ride better in that sense. If you spend a lot of time at T-1, it breeds a certain type of rider. Riding with Joe too, you feed off his style. T-1 has played a big part.

What is Austin going to be like in the future now that the ramp is gone?

A lot of people are sad about it. I haven’t even thought about it in that sense once. I look at it more as we’ve gotten to enjoy it for so long. There’s something new that’s going to come from this, like it’s always has. If it gotten torn out ten years ago, that would have sucked. At that time it was what we had. It’s always been a backbone to the scene. If you come to Austin you gotta go to T-1 and 9th Street. Ten years ago we didn’t have House Park; there wasn’t anything in the surrounding areas. We still have spots now, back then we didn’t. It’s not like it’s ever a good time for the ramp to go, but it would have made more of an impact then.

How will it be for you personally?

It’s always been a place I’ve tried to take advantage of it to the fullest. It’s been a huge part of my career.  With me and Joe being good friends, I’m sure I’ll be helping with wherever it goes, even if it’s in five different locations. Hopefully I’ll live with the future of the ramp.

One of the last blasts over the box for Mr. Hawk; you can't help but miss that combo of Hawk style and the T-1 ramp ambiance. 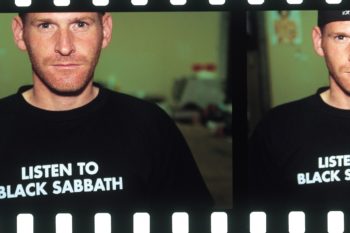 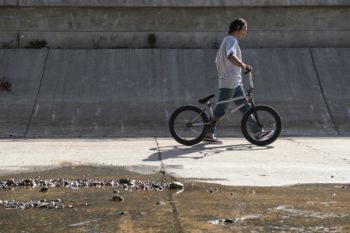 Jeff Wescott - Why it Matters