We’ve all heard the stories about Dave Parrick’s eccentric methods of video making; showing up hours late to the filming sessions, multiple extended deadlines, and jumped the gun premieres, sometimes leaving the riders and producers just a little bit frustrated. Well, Dave Parrick is a genius, and everybody knows that geniuses are batshit crazy, and Dave is no exception to this rule. Parrick has consistently made more badass BMX videos than anybody in the business, hands down. All you have to do is look at his long list of accomplishments:

Pretty impressive, huh? Dave has a knack for picking really epic songs, which in turn gave most of his riders an almost superhero-like image. Any one of the videos listed above could be included on this list, but l’d like to focus on three of them.

Two words. Dave Young. Holy shit, where the hell did this dude come from? Skinny as a toothpick and tough as nails with a total disregard for his own safety. There wasn’t a rider around who wasn’t stoked on Dave’s balls out riding style after seeing him in Nowhere Fast. This was Parrick’s follow up to Dirty Deeds and Dave had his work cut out for him, but he stepped up to the challenge and introduced the world to some of Southern California’s newest talent, along with a few of it’s already established, heaviest hitters. Young rag dolled his way into the hearts of riders by putting his ass on the line and rolling the dice, getting mangled in the process, but usually walking away with the clip in the end. There is no doubt that this video part influenced young street riders for years to come, and you’d be blind not to see Dave’s influence in the likes of Sean Burns. Sadly, Dave Young seemed to fade out just about as quick as he came onto the BMX scene, and I think that this was Dave’s first and last real* video part.  (A couple of  clips in GT's 'Dead Sailor' aside).

Another rider that people hadn’t seen much of at that time was Josh Heino. Mostly known as a vert rider from New England, Heino moved to So. Cal and quickly established himself in the realm of street riding by icepicking and over-grinding the infamous El Toro rail, opening up the flood gates of the future proving grounds for hungry riders trying to establish themselves. Heino mixed his brave street tricks with stylish vert riding, something that not many people had been doing at that time.

Other notable appearances in Nowhere Fast were made by Ken “Crazy Action” Hale, Ralph Sinisi, Jason Enns, Brian Castillo and Parrick himself. I think it’s safe to say that most videographers shouldn’t include their own riding in their videos (me especially), but every single Parrick clip stood up to the riding standards of the time. Any and all grind variations, lines and high speed manuals, all done with that trademark Dave Parrick half cab, classic.

Castillo had a now legendary part in there too, and for good reason; he took his Parrick inspired street style and hit the accelerator. Parrick must’ve pumped Castillo full of candy, because he was firing out grinds and manual lines at a dizzying pace, going bigger and faster than he had ever done before. Rails, ramps, and dirt jumps, nothing was safe. Hell, he even brought an elevated grind rail to the trails, just so he could do an icepick 7 feet over a dirt jump. At this point in time, Castillo was on another level, bringing manuals to opposite 180s to the table and even manualing the infamous Austin red rail. Castillo rode his ass off and was rewarded with the well-deserved ender in a Dave Parrick production, an honor, no doubt.

One of the best ever - More Info

You were either going to hospital or to get lunch... - More Info

Nowhere Fast is packed with classic US punk & metal

"Well, Dave Parrick is a genius, and everybody knows that geniuses are batshit crazy,..."

Etnies had one of the most influential teams in the sport and in 2000 Parrick was recruited to take on the monumental task of putting together what was to be one of the most talked about videos in the history of BMX.

Forward started off with a bang; Mike “Rooftop” Escamilla was part BMXer and part stuntman. Mike took to the streets, the parks, the pools, the playgrounds, and even the slopes to film. Rooftop was on fire, literally! He backflipped over helicopters, grinded rails on ski slopes, and even set himself ablaze and sessioned the Volume ramps. People either loved it or hated it. I personally thought it was a bit much, but this is freestyle and you can’t deny that Mike was doing exactly what he wanted to do, regardless of what anyone thought.

One of my standouts in Forward is Taj Mihelich. No one can manhandle a bike like Mr. Mihelich. Taj takes his patented burly style and splits his part between the streets of Austin and his short-lived Thunderdome skatepark in Olympia, Washington. Some of the highlights including wallride to downside whip on street, an assortment of crank arm/bottom bracket grinds, and complex skatepark lines, not to mention a few cameos from the late, great Roscoe Mihelich, the unofficial mascot of BMX.

And for the ender, where do you even begin with Ruben Alcantara? El Pollo Loco, or the Crazy Chicken as he became known, had only lived in the states for a few short years, but in that time Ruben transformed from being the wild freestyle guy who pioneered insane skatepark tricks like 360 double tailwhip, into a style god. This was Ruben’s first legitimate video part, and it blew minds. Ruben put the style back in freestyle, with massive wallrides, rodeo grinds, up-rail to 180, one footed nosewheelies, you name it and he made it look good. This part really solidified Ruben’s legend as one of the best bike riders on the planet, if not THE best, and it will withstand the test of time, unlike the blue and blonde hair that Ruben had in a few of his clips. It’s easy, you do.

One of the best sections of all time - More Info 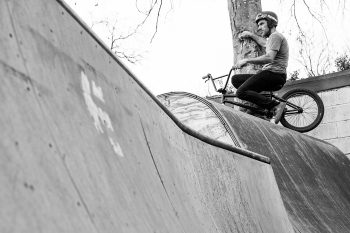 The natural flow master speaks about his time spent at this backyard paradise. 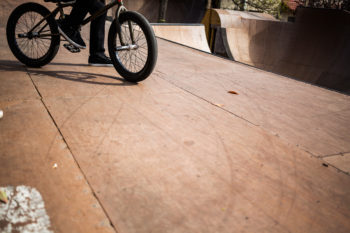