The natural flow master speaks about his time spent at this backyard paradise.

One of the most legendary dudes to ever set his tires on the Skatelite surface of the T-1 ramp is the man, Ruben Alcantara. Being close friends with Joe Rich, Ruben has made it an annual ritual to take the journey from Malaga to Austin. And those visits would entail staying at T-1 during the entire time, with unlimited access to the ramp. Ruben dives into some of his memories from those trips and shares his thoughts on what Austin is going to be like in the post-ramp era.

Good vibes, good energy and natural flow were all present and accounted for when Ruben rode T-1.

"You never know when it’s going to be a good session."

When was the first time you rode the ramp?

I was still living in Austin when the ramp was getting built. I moved to Austin in ’99, and after moving away, by 2005 I was coming here about three times a year. When I went away, then came back there was always something new on the ramp. Joe would always be sending me pictures; I was very excited when I would come back.

What was your favorite part of the ramp?

The mini part with the bowl and two pockets; you can do so many lines. And the first box jump.

When visiting, you would usually stay at T-1. What are some of your best memories you have from riding there?

Yeah, it’s cool, because you never know when it’s going to be a good session. Sometimes you are just hanging out, then all these people show up. I’ll always remember those sessions that were magic and a good vibe. I’m going to miss those a lot.

Ruben adding a twist to one of his countless lines throughout his favorite part of the ramp.

What were some of the craziest riding sessions over the years?

So many. I remember one that was super fun. Joe was riding a 26” cruiser and was going so high. It was such a good day.

After all the years riding T-1, what’s the one thing you’ve taken away from there?

I think I learned a lot how to do airs and whips. There are so many lines that work naturally, you can still carve under coping and have a natural flow. It’s really easy to generate a lot of speed.

What are your visits to Austin going to be like in the future now that the ramp is gone?

For living here, Austin was the perfect place for living. The ramp made the riding scene. I’m sure it’s going to be missed a lot. A long time ago, during the years with the Ritz (old bar downtown) and people being super cool, and being able bring your bike in. I remember that and how the time was amazing. I think the ramp is going to be the same kind of memory. Such a good vibe and energy.

How did the ramp have an effect on the riding scene, since you saw it firsthand when you lived here?

For T-1 to spend the time and money, it’s so nice to let people ride. It’s like it was public. I always told Joe why didn’t he put on a jam, and have a box for donations, but he always said, "Nah." I know sometimes it was hard, since things would break. How cool it was that he didn’t care and just maintained the ramp; so much work and money, for everyone to ride. It’s crazy. For people who live here, to have something like that to ride, with a cool vibe. If I lived here, and it’s not around anymore, it would be a huge void; it would be hard.

I’m always going to have some memories of this magic place to ride. Probably the best place I ever rode. And the memories are way above anything else.

What do you get when Ruben's smooth skills and the T-1 ramp are combined? A purely magical visual experience.

"I’m always going to have some memories of this magic place to ride. Probably the best place I ever rode." 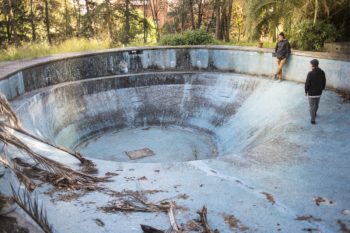