Mikey Almodovar: "No, We aren't the top riders in the world, or the most popular"

One of the greatest moments in my life was premiering LFS2. No, we aren't the top riders in the world, or the most popular, but none of that mattered. We partied like fuckin' animals and everyone in the bar was yelling and screaming. It was great. We all worked so hard on the video, and we could finally say that it was finished. Thinking back on that journey of completing a video now, well, it was all worth it...

I met Dan Diehl 10 years ago. I was 11 and he was just graduating college. I remember him and his crew teaching me a lot of the tricks I know today. Fast forward five years to 2011, and he asks me to film for his new DVD "LFS," with his crew of Doroba, ‘Jeff With Glasses’, and newcomers like Nick Seabasty, Mike Kleissler, and Vinny Crispino. Dan would be the main filmer and editor, and I would assist with filming when need be. In April 2013, we released LFS, and besides Dan not showing up with the video to the premiere, the feedback was great.

So, we agreed to make another... however, things were different now. Nick Seabasty, moved to Arizona, and Dan Diehl was going through some serious shit; long story short, he was unable to be in charge of the filming and editing duties, so we decided I would do so. Special, Steve Jones, and Alex Avilla were added to the mix as well.

Doroba slangin’ em at the best spot on the East Coast, while the rest of the crew recuperates from the full speed runs down the snake run. Photo by Smallfry

Finding time to meet up and film with everyone was easier said then done. We're not kids anymore. We all work full time, some of us go to school, have girlfriends, and other life responsibilities. There would be those times that I would ditch plans with my girl or a family party to go film, that sounds fucked up, and it is, but sometimes you start itching about being out there with the crew. Then there were those 5AM meet up days, just to beat security, cars in the way, angry pedestrians, or to just get an early start. We had to go to Doroba's ender spot about 10 times, got their before 7.30AM every time, attempting to be the early birds of a pedestrian home. It never worked, but he "pulled the trigger" under pressure as an old hag was yelling at him. And of course, with every person that rides, there's those times you try a trick for hours on end, and never pull it. We would drive up to 3 hours to a spot for one person to get a clip. Most of the time it was a success, but there were those moments where the rider never stuck it. Nothing you can do, it's part of the game. Finally, there's those days, even weekends of straight riding, with no clips, no ideal setups, no luck, nothing. That wouldn't stop us though, we'd just keep LFSing until it's time to go home. Filming will forever be my favorite thing, but there's a price you gotta pay to get those ‘crispy jawns’.

Whenever Vinny Leaves the Island and comes over to NJ he always gets heat. After feebling the same setup on the left side he decided the switch side needed to see some grind work too. Photo by Chris Marshall

My favorite thing we filmed was definitely the introduction at the snake run. To get that done was a full on team effort. Jeff With Glasses Google Earth searched for 4 hours just to find the spot. We proceeded to hike almost an hour through straight up raw forest, no type of paths or anything, just ducking and crawling through bushes and trees. Once we got there in one piece, it was another hour or so process to clean and sweep the joint. Finally, after all the bullshit, we set up all our VX's on tripods, and bombed the fucking hill. Riding down a straight up mountain with no brakes was fucking insane, at any moment one of us could've washed out and took out the entire crew. Somehow, someway, we all made it out unscathed.

The man behind the find. Jeff With Glasses google earth searched a total of 4 hours to find this spot. Photo by Smallfry

"Jeff With Glasses Google Earth searched for 4 hours just to find the spot."

I've made tons of web edits before, but editing a DVD took a lot more thought, for ideas, and perfection. I would say finding suitable music for each section was definitely the most time consuming, tedious aspect of the video. Everyone who rides knows that enjoyable music is key, but finding that for each rider was the longest process ever, and at times, frustrating. Countless hours of pandora, Spotify, suggestions from the crew, and shazaam-ing at a Christmas party at work was all it took. Another pain in the ass, believe it or not, was creating the menu. I was active for a deadline coming up in two days, and the menu was fucking everything up. I thought making one would be self explanatory ya know? Just link a few buttons? HELL NO. The Adobe Encore software was absolute garbage, and was the most difficult shit to use for no reason. I was up till 5AM on one of the final nights, watching endless tutorials from British people, and I was going crazy. Eventually I pulled it off, and we are all psyched on how it came out.

I gave Doroba my 35MM, and told him to just point and shoot. - Smallfry

Mike Kleissler blasting a steezy table at one of our best finds of the video. Photo by Smallfry

With a huge crowd gathering and most of the LFS crew out, Smallfry went in for his banger and got this tooth over crank first go. Photo by Chris Marshall

Besides the stress from editing, there was actually some fun in the form of creating the animated eyeball name graphics. Jeff With Glasses originally created the first eyeball Sticker, which has LFS written in the veins of the eye. After a bunch of ideas coming and going through the crew, we thought this would be a great idea for each persons name. Jeff proceeded to draw out every single name in the veins of a custom eyeball in Photoshop. Once he had finished, we transferred them to my computer, where I animated them, with some glitches, and graffiti type effects. That was another long night. I was exporting different formats from After Effects at work, and eventually hit the nail on the head. Yet again, another team win.

Mikey Kleissler was having a hard time finding something for his ender but once he saw this gap he knew that was it. Even the pouring rain that started when he was taking the first run-ups couldn't deter him from going in. Photo by Chris Marshall

"Also, I threw a beer in excitement and accidentally hit Eric Schal, I'm sorry! As far as I remember it was a success."

Once we all agreed that the video was done and was the best it could be, we sent it to the duplicator, and started setting up premieres. Steve Jones sister worked at a popular local bar, that had an outdoor projector, and a decent amount of space. We got to give credit Stevie and his sister, Brittany, for convincing her boss, and setting all that up. Cause god damn, that was an amazing night. We received our shipment of DVDs, and partied on. Everything went well, except for some guy standing on, and breaking the owners favorite, 30 year old statue. Also, I threw a beer in excitement and accidentally hit Eric Schal, I'm sorry! As far as I remember  it was a success.

We'll do whatever it takes to ride a spot.. even if it takes climbing a roof while the cops are investigating a car accident at the closest intersection. Here's Mike K and Doroba getting it done. Photo by Smallfry

Thank you to everyone that came through and watched he video with us. On behalf of the crew and I, we can all agree that it was an amazing time. What I noticed the most about the premieres was I kept seeing the same, young locals at almost every premiere. Young kids stayed late night at the bar (it was all ages) they found rides to Staten Island the next night, and still wanted to watch the video a week later in Woodbridge. We were happy to be able to throw jams for all y’all. And, I just want to say thanks to my family and my girlfriend for putting up with me through this whole process. I would like to thank Mike Brennan and Merritt for always helping me out and keeping my bike rolling constantly. Brittany Jones, and everyone at Meatballs and Brews bar, for hosting our first video premiere. Ed, Angelica, and Adrianne Polio for always supporting us with premieres, jams, and having a place to ride at 5050 skatepark. Rob Larsen at Extremz Bike Shop for hosting a premiere, and helping to throw one of the only BMX jams and Woodbridge skatepark. Finally, thank you to everyone who supports LFS, whether you have a sticker on your bike, you ordered DVD, or you got drunk with us at the bar. We appreciate all of you. - Mikey 'Smallfry' Almodovar

A Simple Question: Does This Contest Format Work?

In 2016 can you successfully mix the world's best Street and Park riders on one course and judge them fairly? 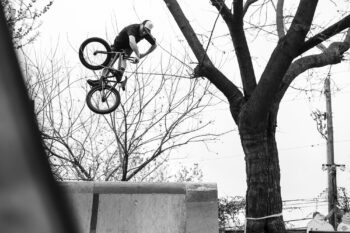