How is this leftovers?!?!

Sometimes you receive an email with a video that's so raw and savage it leaves you thinking about it all week. It was exactly that when got wind of this "B Sides" video of Denby Chandler from the LUX BMX DVD, 'Aeterna' (available now for digital download). For someone we didn't know a lot about, he left a serious stamp in our minds. This is in no way a B-Sides video, it's easily a DVD part in itself, but they must be slipping something in the water cooler at the LUX shop because this is straight up fucked. Sit back and enjoy some of the wildest moves you'll see out of Australia of late, and constantly remind yourself that these are the clips that didn't make the cut! Yeah... we were confused too.

Look out for more gold from LUX and Aeterna on DIG soon!

"You know those big Labradors, the ones that bound and lumber with uncalculated excitement, tongue out dripping with saliva, a face beaming with excitement and an aura to match. Denby is a dog. A Labrador to be precise.

I had already formed a relationship with Denby through filming for another project ‘Dulwich’. When it was decided that ‘Aeterna’ was a go ahead, and Denby had put his hand up to film a full part, the partnership simply continued, although this time with more focus, resources and vigour.

The rider/filmer dynamic is a unique arrangement, one that simply has to work for the sake of the project and the avoidance of many, many uncomfortable situations. Thankfully, teaming up with Denby for this project was an enjoyable experience. In my opinion, the ideal rider to film is one that is motivated, positive, resilient and willing to pull the trigger when the time calls. Denby was all those things. Never was there a weekend or a trip when excitement and motivation was lacking, Denby would ALWAYS be keen and always have a big ol’ smile on his face, unless he was falling on his face – which was actually quite a lot. It is pretty mind blowing how much footage we managed to capture, particularly in comparison to the other riders and in consideration of the time we had (1 day a week effectively).

I only hope the amount of work and energy put into the part shows, Denby really gave it 100. Looking back, it is truly something to be proud of. You’ve only seen the tip of the iceberg for Denby, it’s onwards and upwards from here with that much desire and willpower. Get ‘em pup." - Mike Vockenson 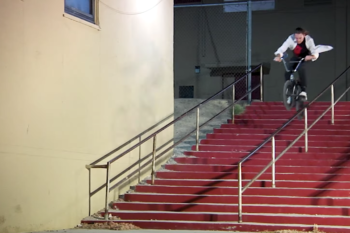 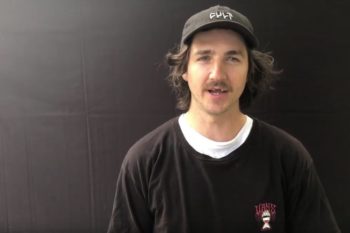