Cutting a mohawk and tilting my seat back was just one of the many inspirations I took from a BMX video - to this day Garrett Byrnes has a lot to answer for. For that instant influence to still play a role when you're well into adulthood is even more impressive, but that's exactly what happened when 4 pegged, steel is real, street rider Dan Banks watched the new Fast & Loose DVD one evening last week. The guy was absolutely choking to leave the house the second the video finished, and he stood up declaring that he was off to ride really fast. Later that evening and my phone buzzes with a photo of half his tooth knocked out and a possible broken hand. His response - "I got a little too Fast & Loose." That pretty much says it all - Viewer discretion advised! - FM

The video starts with a lovely train on a set up trails and then out walks Corey Walsh with a sock on his dick drinking a beer… You know, just your average day at the trails. This is then followed by a segment of just straight pedaling, I mean 33/9 pedaling as hard as you can because they're about to do something crazy pedaling. You know it's going to be a fast paced movie based on the crew but you really get a sense of how fast it is seeing everyone pedaling as fast as they can. The entire intro shows you just how much fun these boys had. Riding, camping, partying, and just traveling wherever they wanted, in search of the next fun ride.

Kris' part opens with a small segment with a song called "Heaven" while he sits on the Huntington Beach pier drinking a coffee. Living on the east coast, California has always been the quintessential heaven on earth, which made it a nice calm before the storm. Next, Metallica starts and Kris is going to work breaking speed limits and unlocking new lines in parks most people would have thought to be impossible. I'm pretty sure he now holds the world record for longest lookback considering he aired what seemed to be 100ft (30m) across a skatepark. I really enjoyed his part and thought it was the perfect opening section. Knowing Kris is a fan of Bukowski, I'll end with a quote.

"Tables, Turndowns, and T-bogs" Cody delivered and then some. Everyone in this video is stylish but Cody seemed to add a little extra swagger to his riding. It almost may have been that luscious mane of his, along with that glorious mustache. Watching Cody's part I couldn't help but think he'd be a real fun dude to get in a van with and travel around drinking beers and riding some dope parks.

Matt's part opens with him slaying various sets of trails, and then moved into the depths of different concrete parks and bowls. I've always been a fan of Matt's riding; this part solidified that even further. This wasn't a video where I expect to see a lot of tailwhips but man, Matt did some of the biggest ones I've seen in some of the gnarliest bowls. This was a fantastic well-rounded part and gets me stoked to ride.

Hucker has some insane clips that aren't actually in the friends section but after Cody's part. For the sake of my OCD I just put it here. He does by far one of the craziest hang 5 lines at Pacifica Park by San Francisco. Ron Wilkerson has a few airs in what seems like very deep bowl, still getting loose! There is a slew of amazing riding from a bunch of different dudes from all over the world. There truly is nothing better than sitting on the deck, talking shit with your friends, and having a good time.

If you've ever met or got to share a deck with this man you know he is something else. One of the nicest guys you'll ever meet. I had the pleasure of spending a few days with him in Austin during the last Texas Toast. Even the most laid back sessions included several 10ft+ airs and insane nose manual combos. His part here is no different. From huge airs down to the most technical front end riding, Jason left no stone unturned. He really is a working class man and had a big part in several ramp builds, including that miracle in Enarson's yard. I'm always amazed at the lines he can come up with; I've watched this part a few times now and I still feel the need to rewatch it because I feel like I probably missed something. In fact I think I'll go do that now…

Along with Jason I was lucky enough to meet Corey at that same Texas Toast. If you've ever got the chance to go to Austin you know House Park is always the meet up spot. Watching Corey ride House you could tell that there was something special about him. When he would drop in you would put your phone down and watch him destroy the bowl. Much like that day, his entire part is non-stop bangers with some that left me scratching my head thinking "how is that even possible?" He brings his unique eye from the skatepark to the streets and charges at anything with transition that he can find. His part seemed fitting to end the video. I can't say any one clip or line was better than the rest because they were all just as wild as the clip before and left you guessing what would be next. If this part doesn't get you stoked to ride I don't know what will!

It wouldn't be a BMX video without some Lucero… After watching this video the first thing it made me want to do is pump my tires up to 110psi and check my stem bolts. All of the music was on point for getting you stoked on going fast! You can tell the boys had a whole lot of fun traveling and riding some amazing concrete parks. In some scenes it almost felt like you were there cheering on whoever just landed an insane transfer. I attempted to take notes watching it the first time but then realized I needed to experience it with my undivided attention. I'm about 5 views deep since I got it in the mail yesterday and still find myself wanting to watch it again. I believe I can speak on behalf of everyone in saying thank you guys for an amazing video. If you haven't ordered your copy yet, do not hesitate. Cheers, guys! - ES

Vans 'The Circle - Meet The Judges

Got any tips? "Wake up early" 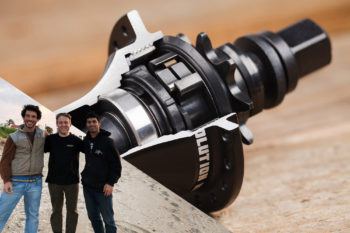 BSD AND THE STORY BEHIND THE BIRTH OF THE FREECOASTER REVOLUTION