"Maxime Bonfil is an Enigma. A free spirit that marches to the beat of his own drum and just so happens to make Bicycle Motocross very easy on the eye. Hailing from the south of France, his his nomadic lifestyle keeps him traveling and exploring the globe for adventure." -Gaz Sanders

Quiet, humble, and modest would be three words that come to mind when I think of Maxime. Granted, I only really hung out and rode with him a few mornings in Austin, so who knows, maybe he’s some raging party animal when he’s back home across the Atlantic.

But I doubt it.

During those days I met up with Maxime, he’d go to House Park at 8AM to avoid the crowds, and ride Mabel Davis park during the mid-afternoon peak of Texas heat, once again probably to avoid the crowds. I’m not sure, though, since he doesn’t seem to speak a whole lot of English, and I can’t speak more than two words of French, so our communication was quite limited. Bottom line, Maxime’s introverted tendencies showed through, as well as his tendency to rage transitions of all types on two wheels, in that silky smooth style. As Gaz put it, he rides like a French version of Roey.

Shout out to Fabien Conry for translating the following interview from French to English; without his help, you’d most likely be looking at a very bad mess of indecipherable gibberish, thanks to a poor attempt via google translate. -RD

Steep transitions, concrete, hips, pool coping, and friends? Check. Looks like Austin's Mabel Davis skatepark had all the factors to be a favorite spot for Maxime this day.

If one day you had the opportunity to design a bowl, what would you do?

For example, would you do something like in Malaga, the bowl that Ruben made ?

That bowl looks great. Unfortunately, I didn’t have the chance to ride it, but yeah, it looks really fun to ride. In Malaga, the whole area there seems to be cool, not only the bowl. I really need to ride it to get my own point of view on it.

Tell us what kind of tricks you dreamed of when you were younger ?

There so many, but the first one was the backflip!  I dreamed of doing it more on big jumps than on fly-outs. Today I’m not doing them really often; but it’s not only the trick, but more the sensation you get that I like.

When you dreamed about tricks, what was the spot it was at? Was it a skatepark, dirt? Try to describe your dream.

It’s not about a huge skatepark but more a cool and fun place to ride, and for sure with my friends. A concrete spot would be nice, as now I’m 100 % concrete, ha, ha, ha. This is all I need, with a great landscape; the atmosphere is also something very important for me.

This may not the back flip Maxime dreamed about when he was a kid, but any of the classics fit perfect with his style.

Describe your favorite spot to ride in five words.

I like a steep spot, a concrete one, with some hips and pool coping. And with my friends. That would be my five things. At the end, I like to ride everything from a pool to a flat ledge, but you  can understand the concrete bowl is my favorite spot to ride.

What was the most memorable experience in your whole life?

There are a few, but last year when I rode some real pools in Arizona, it was crazy. It’s hard to describe, but it was all perfect when I was there. Riding some stuff that was not create for bike riding to begin with. This experience was cool, I was with some friends, weather was great, atmosphere was nice too! Riding those real pools was like a dream.

What are the difference between the pools in Arizona and the ones you’re riding in France?

In France, most of the pools are square ones; here the pools have got some transitions and are more fun to ride.

What are your favorite parts on your bike right now?

It’s my frame. I’ve been riding it a while; more than four years. I’m not into frame specs or geometry, so I don’t really know why I’m loving it, but I’m feeling good on it. I don’t want to try another one, because I know this one is perfect for me. I guess that the weight and the size help to get that comfortable feeling on the bike. Maybe there is a mental thing that has helped to enjoy it, as I know that I’m feeling good on it.

Maxime turning on some A/C with a high speed transfer during the first days of the Austin summer heat onset. 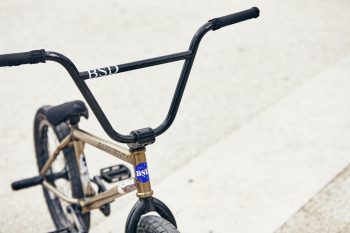 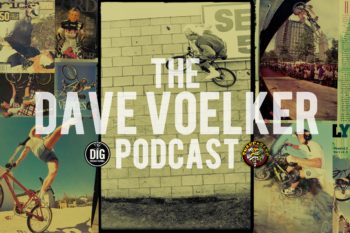