Street legends past and present... and Tom Creasy. NYC 2015. Photo by Fred Murray

It has quite rightly been said that we don't need anyone to tell us when and where to ride our bikes, and yes... that is the point to a counter-culture, no rules or guidelines just pure passion and the unplanned path that it leads us down. Yet, in BMX culture today we seem to be stuck in a rut. There is so much influence from so many different directions that it has become hard to differentiate between us, as BMX riders, and everyone else; and what will help us grow as a community. BMX is taken in the direction you personally like to see it going and you reinforce that opinion with your own output. Wether it be a producing or supporting a DVD, a web video, online content, a clothing company, a brand... or in this case organizing a jam that amounts to being larger than your hometown scene; it all has (hopefully) a positive impact on BMX as a whole.

In 2017, The Street Series has officially ran it's course. Created around an idea to simply just do more for BMX and bring bike riding to the people, to be recognized on a worldwide scale. So now that it's over, these jams that were created in support of BMXDAY, are left to be cared for by us, the BMX community at large.

I caught up with Tom Creasy, the Hastings UK rider behind The Street Series and the current head of the BMX and Skateboard program for Monster Energy in Europe, and asked him for his insight, opinions and after thoughts about this whole thing....

Give us a quick background check on who you are?

My name is Tom Creasy, a 32 year old BMXer from Hastings, England. Currently heading up the BMX and Skateboard program for Monster EMEA and soon to move and head up all things marketing at Source BMX from the end of September.

What exactly has your obligation been to the Street Series as a whole?

Well, for the past 6 years working with Monster EMEA, this started as a project for them but has grown in to almost a full time job for me on the side at points. I run all the social media, plan all the jams with local riders and the Monster dudes, source the artwork, branding, rings etc. Its been a lot of work but I love it and this is what I do. I let myself get a bit consumed by things sometimes and become a bit of a control freak haha!

How old is the Street Series and where did the first jams take place?

We started it 6 years ago with the DUB BMX guys. First, in the UK then it spread and spread to anywhere with a good scene and spots.

Boyd Hilder and a couple others almost colliding on a very busy session in San Diego.

Could you name all the cities and official Monster team riders involved over the course of this project?

Do you think the impact of this event would be any different if these highly influential riders wouldn’t have been the faces of the series?

Not sure? I hold huge value in the crew and their support, constant input and of course they have a massive pull for both fans and other pro riders! But then you see examples such at Thee Block jams and the BMXDAY jams in the Philippines where hundred and hundreds of riders head out regularly. It depends on the location, timing and weather.

2017, was the sixth and final year of The Street Series, in the beginning was it anticipated to only be a six year gig?

For the first year, I went to Liverpool to see Jack from DUB after he had thrown a rad jam in London a couple summers prior. From there we planned year one and so on. From time to time I’d have some idea that it could develop in to something else but would always revert back to keeping it simple and not lose the spirit of what it was. At the beginning of 2017, alongside the crew I decided it would be the last one and in coming years we will do different stuff to support BMXDAY. We liked the idea of ending it on a good note and not dragging it out year after year. It is an illegal street jam and blows my mind that for 6 years we didn’t have any big problems. I'm glad it ended the way it did, best year for sure.

Was the sole purpose of The Street Series to establish a globally recognized day in the name of BMX?

Not at all. After about 3 years we started having random on lookers (normally Skaters) asking if it was 'BMX DAY' at every jam. I liked the idea of it becoming that but didn’t know how to call the date. Hoffman and DMC obviously called it around the same time which was ideal as those guys are legends for the sport and it tied-in perfectly. So in 2015 we did the first round of jams on one day as opposed to spreading them out over the course of months.

"I just want more and more people to do something within BMX and have fun." - Tom Creasy

You can't have a gathering of over a few hundred bike riders without a little police presence?!

BMXDAY is officially July 20th each year... Yet, you guys normally do the jams on a different date. Can you explain why?

Yeah… bit of a headache that, but I will try to explain.

I looked at things like ‘Go Skateboarding Day’ a lot of brands and crews do not always stick to that date and do it on the closest weekend. I went with that approach so that as many people as possible could be involved and not worry about school or work clashing. It has caused confusion but I guess the next 3 years will see it on Friday, Saturday and Sunday so it will work out and you get the idea. Also, I personally haven't ever once said that our jams are ‘BMX DAY’ and I always push what it is in support of…

People will always throw a jam or event on a day or two either side depending how it works out. There's no rules, it's just good to get people hyped and riding in my opinion.

Does Monster still plan on contributing to it's cause now that the official contract is over?

Of course! This year we actually had other events outside of The Street Series that the team and I worked on together. Kevin Kalkoff had a dirt/ramp event in France, Source BMX had a Battle of Hastings Qualifier and there were jams in Italy and elsewhere. I just want more and more people to do something within BMX and have fun.

For 2016 and 2017 you were present in California (Los Angeles for 2016 and then in San Diego) for the final jam… How did you enjoy the display of BMX state side and in California in general?

I loved it, always do. How can you not? I actually also always come to those jams as its the last time zone of the day. I try and be awake for all other timezones too and make sure the dudes are dialed in. I think it spanned 22 hours this year?? Pretty tired afterwards and hugely relieved haha.

On a global scale have you noticed an increased interest and amount of participants over the past three years?

Yes, always! California loves it, the east coast goes nuts. It goes off everywhere and I really hope that momentum continues with kids throwing their own stuff. It's not hard, just get out and ride with your crew. Make a poster maybe? Easy... ;-)

DeMarcus Paul and Garrett Reynolds are San Diego Locals and they came out to ride and make sure everyone enjoyed their city!

"Blows me away every time and I can't thank everyone and anyone who has been a part of it all enough. As I say, lets try and keep this going for BMXDAY 2018." - Tom Creasy

In the midst of the Street Series, came about the highly recognized video project ABOVE BELOW, created by Rich Forne in partnership with us here at DIG. How did this spawn out of the first years of the street series jams?

We always made jam recap videos in the first few years. In 2014 I asked Rich Forne to produce an overall documentary about street riding from all the jams and we would be able to film some riding here and there to mix in. We quickly realized it would be more than that and somehow over the course of 10 months, ABOVE BELOW came together and released at the end of that year. Still blows my mind how it all worked out the way it did.

People should keep and eye out for BEYÔND, the follow up part and mini documentary from Dan Lacey. Coming sooner than you think from Monster Energy! ;-)

Overall, what is your reaction to the fruition of this project, do you personally think it was a success?

Beyond anything I could have ever imagined. Blows me away every time and I can't thank everyone and anyone who has been a part of it all enough. As I say, lets try and keep this going for BMXDAY 2018.

All the riders who throw jams, all the riders who attend them, Everyone at Monster Energy, DIG BMX, RIDE BMX, Endless, Jack at DUB, Jay Bean all the media that always support and give it shine. Benny, Zunda, Nathan, Dak, Lacey, Donnachie…

Honestly there is 6 years of thanks here and I will blow it if I even try.

Wild Times Down Under - More Info 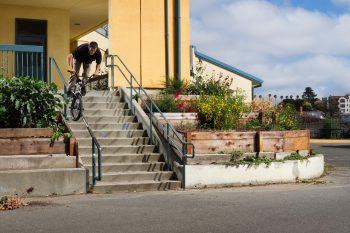 The Percept DVD With Bob Randel

"My whole life is a trip but none of it is organized." 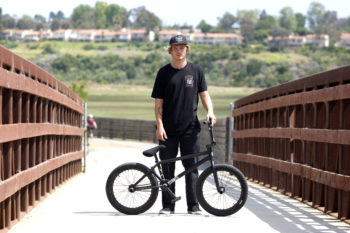