Luckily as BMXers we are used to dealing with a variety of elements from cold long winters, capped rails, glass, and cops.

When I first got the call from Povah to join another Etnies trip, I was stoked.  Getting back in the van with Nathan, Aaron, Will, and Povah again certainly was a plus. Benny was joining the trip and I have always loved his style. I was excited to finally be on a trip with him. With the addition of Devon being added to the Etnies Team, this trip was leading up to be fun and with a hefty crew at that.

Escape from an irregularly occurring and complex series of climatic changes?

Suddenly, I started hearing random rumbling about the general public that “Oh man, we are getting bad storms coming it is El Nino”. I laughed it all off, as always, figuring it is just Californian’s scared they will turn into a Gremlin from a little rain. The week before, in a moment of boredom, I decide to check the weather for the trip which was set to happen in the L.A. and Southern California area. The forecast called for rain all week long with a 100% guarantee in just about every major city within four hours of L.A. - must have been a curse from Benny! I swear an hour before I saw an IG post of his bike saying “can’t wait to be riding in the sun”, or something of that nature. Shortly after I get a text from Povah saying we got to find sun looking like rain all week every where but maybe Vegas. I am never one to object to a Vegas trip but we had just been there with Nathan and Aaron, but at the same time sunshine did sound good.

Let's all face it; Benny has a style like no one else, always helping to make the spots look good even if it means rolling around in shards of glass just to clear a deadbolt.

So after meeting up with the crew. We jumped in the van and headed through the pouring rain to Vegas. Seems like even in “Sunny” Las Vegas we were cursed as the wind and cold mixed with on and off showers continued. Luckily as BMXers we are used to dealing with a variety of elements from cold long winters, capped rails, glass, and cops. Luckily even after spending a day battling with the cold and rain in a ditch, the second day proved to open up allowing everyone to enjoy a few local gems and have some fun. Just before bailing back to L.A. where weather was appearing to look up we stopped off at this new curved rail. Remarkably, even in the freezing cold Nathan found the energy to get the trick he wanted. Just in time for Povah to deal with a five hour drive, of no music and a lot of my coughing.

"Remarkably, even in the freezing cold Nathan found the energy to get the trick he wanted."

With us already practically getting the boot and a horrid run up; Mike quickly ran around like a mad man—in full comedic fashion—setting up these LED lights, so Nathan could slide this ice first go.

Luckily, once back in the LA area the weather was warming up and looked like less chance of rain. We first headed out to Moore Park College to start the day off knowing a couple other things in that direction we wanted to ride. As we got closer it was evident the rain was not letting up. As it drizzled on and off and everyone slowly started riding and Aaron got this line he wanted. A cop pulled up and let us know that because of our damage they are having a hard time paying teachers or some sort of bullshit, as he spoke AT us while we nodded letting him waste our time, we slowly left.

Aaron battled out this trick at the white banks for some time, but ended up getting it clean just in time for the sun to set. What you don’t see here is the photographer messed up the angle overlaying the manual between the dubs and whip. Can't win them all...

The second we left the rain seemed to follow us onto the next spot only allowing a quick yet productive session at one of its many setups. After that it was clear to me this trip was going to be a battle with weather. Personally, I will take that over getting kicked out of spots non-stop any day. The sky does seem to play these little motivating tricks on people as we were all on this trip together to have fun and make the most of it. We quickly worked around the weather exploring more spots and having a great time doing it even if it did mean making Povah drive an hour or so to escape the weather, or back to a spot we got rained out of previously.

Devon warming the rail up for tricks to come with a crank arm.

Sure enough as the trip reached it’s last few days, California got back to normal and brought out the sun and raised the energy among the entire crew. Unfortunately, new edition to the crew Devon ended up rolling his ankle the first clear day we had, but like a true gent and despite living only 20 minutes from the hotel he proved to the entire crew he wanted to be there by staying aboard the trip. Picking up the camera and continuing with us all to have a good time even if it meant giving him shit for his finger boarding habits. Shit! Even our good friend Neil made an appearance the last few days of the trip to keep the entertainment going (I think he was itching to come out the entire trip). That or maybe it was Nathan’s addition of setting up a hammock at each spot, or Aaron’s non-stop persistence to just have fun no matter what.

Benny L making a rough one look smooth with this switch Luc-e grind.

Clips for the video aside, as we know with this crew there was many and even more photos held back till closer to video time. Either way, in true BMX fashion this trip like so many to come had it’s ups, downs and battles, but ended up being nothing short of another amazing ass time on bikes with good friends. Now if we could have just won the Lotto (which was over a billion that week), stayed on the road and bought the Playboy mansion... maybe then we could have made this one never stop.

Nathan quick to have Benny's back with a 180 Luc-e grind to indian.

I suppose all those followers and grilled cheeses can stress out a phone text at anytime.

Nathan battled this line out for a minute before ending it with a switch tooth to 180, courtesy of Povah wanting to see bricks grinded.

Will Stroud, a constant source of entertainment and good times.

Benny L ending the line with a wall to 180 while Will is quick in tow.

Nathan and Manzori celebrating the final to a lengthy line battle. 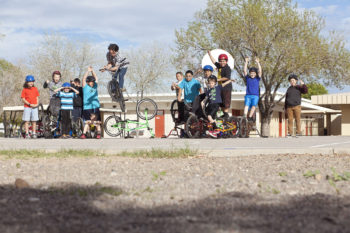 Jeff Wescott: "Why being interested in something untraditional can be positive and beautiful"

Why the Arizona based Wheels In Motion After School program is doing things right... 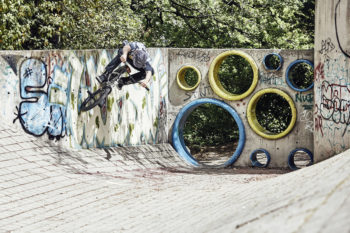