When etnies first BMX full-length video 'Forward' was released in 2002 it really solidified etnies as a company in BMX that was here to stay. The team was insanely stacked, with some of the all-time greats like Taj Mihelich, Dave Freimuth, Joe Rich, Sandy Carson, Mike Escamilla, and Ruben Alcantara, to name a few. Thanks in part to the initial impact and lasting influence 'Forward' had on BMX, pretty much everyone in that video had become legendary. Five years later with the release of 'Grounded', the team had evolved with Taj, Joe, Sandy and Ruben continuing to fire out strong sections, along with newcomers like Morgan Wade, Brian Kachinsky and Aaron Ross launching another benchmark of riding progression and first-rate video production.

Both videos are timeless, and groundbreaking for the time and era. 'Forward' and 'Grounded' gained etnies a long-lasting reputation for producing amazing videos, both from a riding and production standpoint. Thanks in part to all the riders, filmers and editors, the legacy as a brand and team is forever ingrained in BMX. - RD

There was nothing in my mind about “getting clips”. The trips didn’t even feel like they were filming-based. You have an understanding someone is there to film. We would go somewhere that was new, first and foremost you are enamored by just being there. A lot of it was just riding and someone asking if I could do it again to film it.

The first clip in my part- I originally saw that spot when Ruben and I did the train trip. It was one of those things that gave me the chills. I had never jumped to land in a set of stairs, and it’s a concrete rail. I hadn’t done anything like that in a long time. We were doing a trip around Spain, and had it in my head that I wanted to do it. I remember thinking as long as I don’t go over it I will be fine. Of course, my back wheel went over it. It was one of the few times I knew I was fucked up from the crash, and was still able to block that out and try it again.

The second time I was riding up to it, I was still seeing stars, and hurt my knee pretty good. I could still physically do it, so I gave it another go and it worked out. I just laugh so hard every time I see my hand blow off at the bottom. I can still remember that in my head, and being so like, “I’m not trying this again; you’re riding out of this.” I couldn’t ride the rest of the trip because my knee was jacked.

The 3 table over the spine at T-1 ramp was my favorite clip in my section. I hadn’t done one in a while. In my mind I never came to terms with doing 3's there on a comfortable level where I could do them all the time. It went pretty much how I’d hoped to. It’s nice to look back on the ramp and have that. -Joe Rich

"A lot of it was just riding and someone asking if I could do it again to film it." 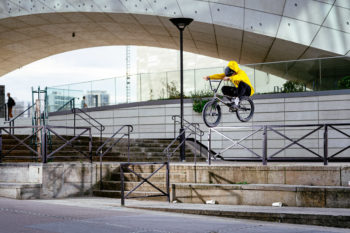 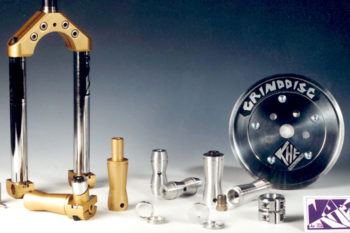 "Some started bike companies to save their lives, others just wanted to solve the simple problems they were facing everyday"