Nathan Williams & Christian Rigal - The Story Behind 'Why Not?'

Ending a part is never easy...

Interview and photos by Kevin Conners

If no one ever tried anything risky or uncertain, imagine how dull the world would be? The same can be said for video production in BMX... if we never mix things up the visual excitement will no doubt flounder or just sit stagnant. Christian Rigal and Nathan Williams decided to try something new and spent the last three years working away on their new independent video release 'Why Not' - funded by those two guys (with support from a few sponsors along the way). You have probably downloaded it already (if not go here), so sit back and let Christian and Nathan take you through the process, from start to finish.

Christian: Hahaha, the name was the last thing we figured out for this project, but it seemed very fitting! But yeah, 3 years from start to finish. We never knew how long it would take, we just kept filming until it seemed done, then we buckled down and got the last few clips. 3 years sounds like a long time, but it feels like we just went on that first trip to Nor Cal a year or two ago!

Nathan: Hahaha it just seemed to make sense, seeing how none of it was really planned and we had no idea how long we’d film for or anything like that.

That’s along time to film for one project when the first year or so being close to a 36 hour drive apart. Was there ever a point when you decided ok enough is enough I am done with this stress? As many of us know this isn’t always fun there’s moments where it is simply pure stress strait to bliss.

Christian: Naw man this whole project was on our own time and stress free, that was the point really. I feel like a lot of the stresses associated with filming a video part come from being on trips and feeling like you have to be productive or "get something" just to get it. With no sponsor obligations or a deadline in sight we'd just go on fun trips and never really worried about anything, so they were all fun and productive! I'm sure Nathan felt a little stressed at the end as he was trying to wrap it up, but i think thats normal. Ending a part is never easy, there's always clips that get away and a few road blocks but no major injuries so thats always good!

Nathan: No not at all! This was a very easy going project that we would only be filming or doing a trip when both Christian and I had free time. So everything seemed to just flow. There were obvious times of battling a trick or something, but beside that, it was pretty mellow.

I think the last few weeks of filming though I put a little bit of stress on myself to get two last clips that were giving me trouble. It got to a point where I feel like pressure I was putting on myself to get them, was the reason they were giving me such a hard time. I was already happy with the part where it stood, and so I decided to let the last couple go for now and come back to them for the next project I start working on.

"everything seemed to just flow"

What was the longest gap you guys went between filming? I know for both of you, you’re constantly gone or working on other video parts.

Christian: Shoot I feel like we'd go a couple months without filming sometimes. Between our travel schedules, Nathan filming for multiple parts/projects, and me getting hurt/surgery there was a lot of time off, but anytime we got together it was always productive! I don't think either of us ever felt that this part got sidelined, when we were home and free we were stackin'!

Nathan: Maaan, it's hard for me to say. I feel like it was a few months or so in between filming sometimes, but since we both had other stuff going on it didn’t seem like that long.

How many video parts for other sponsors or friends did you film during this time period?

Christian: Oh man I don't have a clue this is probably a better question for Nathan haha. I'd say 10-15 video projects for me though?

Nathan: I believe 3 or 4 projects for me.

Was there any tricks that just had to be left on the table?

Christian: We had a bunch of stuff that he didn't pull, but only one trick he really wanted that we couldn't get, pegs tires to 180 crook on a down rail. Aside from that, any clip that wasn't in his part was in the promo, so we made the most of everything we shot!

Nathan: Yeah there were definitely some that I wanted to get that I either didn’t find the right setup or it just gave me so much trouble that I ended up leaving it for now. The cool thing about the ones that got left out though is its motivation to start another project and keep trying to get them!

Christian, at one point you completely switched cameras and model for this project? What where some of the challenges faced when simply just trying to decide how to get this out and what format?

Yeah I went from my Red Scarlet dragon to the new Red Gemini and it was a game changer. Footage looked so much better, and the low light capabilities are insane, it made me want to re shoot all our night clips haha. But the model of the project never really changed, we threw around the idea of having Demo, Corey, and Nathans parts all together in one film, but they were filmed in different formats so that idea wasn't really possible. That idea only came up because of iTunes though. They stopped doing short form content so our only option for them to be the outlet was a full film. Glad we changed it up though. Gum Road opened up the option to use whatever music we wanted which i think really made the video as good as it can be!

" If you got a spot you want to get at and it requires going in the middle of the night to cut caps off to go film the next morning… Christian is down and will be there either doing it or helping make it happen."

Nathan, I know it’s nearly impossible to say but what was one trick you truly had to work for?

Nathan: The one that comes to mind initially is the Manny 1 over the bank to fence in SD. I don’t remember how long it actually took but it felt like hours haha. It was hard for me to figure out the hop cause it was kind of a quick Manny with the speed I had to go to get over the fence.

El Torro. Really… you had to do that to it didn’t you? I know you have gotten some clips on it a few times now over the years was that one you always wanted to get on that rail?

Nathan: Haha. Not really one that I thought about for a long time I don’t think. I had been seasoning the nollie over pegs for a little bit and I just knew that rail is really low cause of how steep it is, so I figured I’d give it a try. I thought it would be cool if it worked cause I had over iced it years ago, so it would feel like it came full circle haha.

Did you guys end up going on al lot of trips for this one or mainly utilize the move to San Diego to your advantage?

Christian: I think we did 5 or 6 Nor Cal trips, one SD to Austin trip, couple day trips to LA/ Inland empire and then a bunch of filming all over SD!

Being such close friends and working together so closely, was there ever a time you guys found it a hard push and frustrating? I mean at some point everyone gets frustrated, and starts cursing concrete.

Christian: Naw man Nathan and I have been riding, traveling and filming together for so long, we've even lived together so there was never anything like that. I think towards the end of the video Nathan was a bit stressed when some tricks weren't working out and he had a big trip back home coming up, but thats normal, ending a video part and calling it "done" is never easy! But Nathan has always been one of the most calm dudes i've filmed, he never gets fired up and yells or throws his bike like i used to do hahaha. I've always respected that about him, dude can try something insane for hours and he wont loose it haha

Nathan: Not at all! Christian and I have rode, traveled, hung out, so much over the last 7 or 8 years that we know how each other works. It’s a pleasure to go on trips and film with him cause he’s always down to do whatever. If you got a spot you want to get at and it requires going in the middle of the night to cut caps off to go film the next morning… he’s down and will be there either doing it or helping make it happen. Or if you’re tired and just wanna look at spots, he’s up for driving around all day.

'Mellow' might have been a good name for this project too haha...

NATHAN WILLIAMS "WHY NOT?" TRAILER 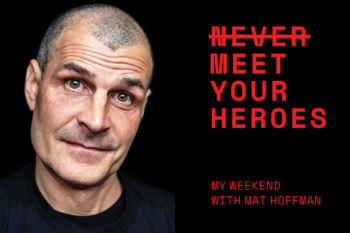 "Everything I’ve done within the BMX world had led me here..." 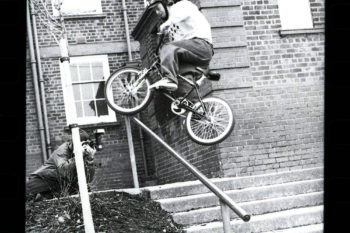