X-up grinds are a very all or nothing trick, that either go flawlessly or fail miserably. On Raban's first true attempt he inadvertently put his front end over the rail and slammed to the ground painfully tangled with his bike. After another couple of warm up double pegs, he committed again to the x-up and it was as perfect as can be.

The last time we spoke with Alex Raban it was part of our The Finer Things - Crunch Time feature nearly three years ago and as we all know life can change quite a bit in the blink of an eye. Raban has since relocated a bit further north to Morro Bay, delved heavily into video production work at the DRKHRSE studio, and finished off yet another outstanding video part. A bit more on what he's been up to...

When did you begin filming this section?

Was the original plan for it to be a part of Volume 3?

Yeah, Mastroni’s original plan was to do Volume 3. But there wasn’t really enough travel budget at the time to continue the series for everyone that was involved.

Any notable stories or battles to get clips working on this one?

The main one that stood out was that wood rail feeble. It’s being saved for a Ride Bmx project Mastroni is working on currently. We woke up one morning to go shoot this really steep wood feeble. Which I felt totally confident on attempting, excluding the run up. The first attempt I anti popped and my front peg got stuck in the railing and I get catapulted 19 stairs down. I literally felt like I blacked out, I had no way of getting out of it. It just happened so fast. My shoulder definitely got separated. I just remember being so mad that was the first thing that happened. My adrenaline was just pumping that I really couldn’t feel how jacked up I was.  I had to go back up and get it done or it was going to haunt me. I think it was the third time in when I got it and then I was out for several months after haha.

The aforementioned rail feeble on the outskirts of Long Beach that nearly got the best of Alex.

What else have you been up to lately?

Morro Bay is great! It’s a small beach city with a slower pace of living. Love the vibes out here. My job at DRKHRSE has been really fun. I literally have access to a full creative studio. Which has been kind of my dream to have something like that close to me.

What sort of projects have you worked on at DRKHRSE? Is this your first time doing some video work outside of the BMX realm?

Besides BMX filming and some personal side projects this is the most fresh work out of BMX I have done. Which is great cause I thrive on working on something new and figuring out creative ways to put it together. I’ve been working for DRKHRSE, close to a year now, where I’ve done commercial work for the city and promotional projects for larger companies. Right now I just got done working on a 360 Virtual Reality campaign for a Health Travel Company for Facebook. Amongst doing personal projects thru DRKHRSE as well.

I noticed there has been a revival of the Rec DIY in Nipomo. How did the original spot come to be?

Yeah! Well after the rec center caught on fire years ago it was bulldozed leaving a large slab of foundation to build on. A DIY dream spot. I wanna say this is the 4th resurrection. It’s been a constant battle for several years. The owner of the property would hire the county to come and bulldoze everything there. And it would happen at its prime. I believe right after we threw a jam there they destroyed everything. And it was like at least a year and a half until local skaters started re building again.

Were you involved in the latest incarnation?

I wasn’t involved in this new rebuild. A few local homie skaters have been putting in mad work on the place and really bringing out a sick version. And so far it’s been doing great. People have been donating to the spot as well for future additions. It’s a trip to visit the town I grew up riding to have a spot like that to come back to. A lot of memories, I love it.

Do the skaters and riders coexist peacefully?

There’s always a great flow of positivity going through that place between riders and skaters. We vibe off of each other, we’re practically doing the same thing. Trying to land that certain trick, line or doing something out of the norm, it’s inspiring.

Have any other new parks popped up in the Central Coast?

San Luis Obispo skatepark is the latest one. I know there is works for Nipomo to get a skate park. But that won’t go into effect for several more years. By that time, the rec will look like burnside, haha.

Crook 180 on a drop down rail in Los Angeles that saw a lot of action for a few years, but was skate stopped very shortly after this session. I'm almost certain Alex got the last clip here.

Thanks or shoutouts? And where can people view your video work?

Yes thanks to you Devin and DIG BMX for the interview. Thanks to Brian at Volume Bikes, Mike Mastroni and Josh Clemens for making this happen. Also shout out to all my friends and family, My boo Jenny Gosnell aka Nasty Boots, Brett at DRKHRSE. To watch recent films. Visit darkhorse.work, Instagram @darkhorse.work, Vimeo: DRKHRSE 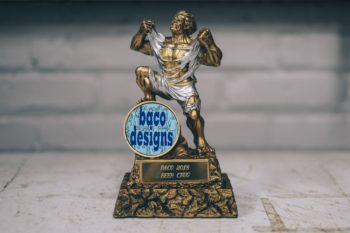 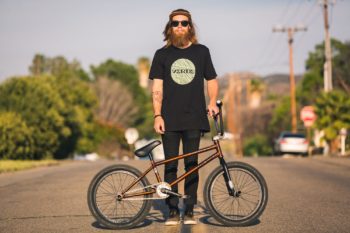 A first look at his new Verde rig