“Out Of Line” is WeThePeople’s 4th full length endeavour, following in the stead of their 2017 projects: “Foundation” and “ENDSTATE”. Whilst both of these vids were filmed HD, “Out Of Line” boasts 38 minutes of VX goodness; featuring full parts from Dillon Lloyd, Dan Kruk, Jordan Godwin and Felix Prangenberg. Where each of these dudes are at the forefront of progressive street riding, “Out Of Line” promises the potential to redefine what’s possible as we look to round off 2020 and welcome in a new decade of technical street BMX. I’m excited to dive in and see how it fares …

Opening with a montage of slow mo crash clips, fights, and a couple shots of Dillon Lloyd without a shirt on, we also catch a glimpse of the various destinations visited throughout the 2 year project (such as Barcelona, New York, California and the UK). Where everything’s edited to the beat and a VHS glitch reminiscent of “Deadline” is interwoven between the clips, you can’t help but feel that this is going to be heavy …

Going into this video I was especially excited for Dillon Lloyd’s section; so for me, this was the perfect way to open the DVD. As the intro song carries into the beginning of Dillon’s part I was promptly reminded of his unrivalled tailwhip skills following a hop 3-whip then pegs hard bar to inaugurate the video.

After not seeing much of Dillon since his BUCK promo in early 2019, his “Out Of Line” section provides a healthy reminder about “who’s boss” when it comes to both technical and burly tailwhip combos. Needless to say, there were multiple occasions where I thought “surely that’s the ender”, only to be left scratching my head over another NBD variation. I particularly liked the uprail ice to switch downwhip, and loved the look of the pegs hard double throw bar, not to mention the front flip ender… This is going to be a tough act to follow.

As with most DVD’s, “Out Of Line” wouldn’t be complete without a solid mix section, featuring the likes of Grant Castelluzzo, Stephan Atencio, John Yoh and many others. I’m ashamed to say I didn’t recognise all of the dudes in the mix, so name titles wouldn't have astray. However, In WTP’s defence, names can sometimes be a distraction so I understand their decision to leave ‘em out.

Over the past few years Dan’s really cemented himself as a household name synonymous with hard 540’s, nollie hardways, and incomprehensible smith combos. As the DVD crosses the 12 minute mark, the ‘Bat for Lashes’ track heeds a nice vibe change from the instrumentals used in the first two sections.

As the part begins, Dan’s versatility really shines through, wherein the first 30 seconds delivers a mix of cellar door, sub-box and downrail clips emphasising his versatility against the unique architectures of New York, Barcelona and California respectively. One of the standout clips for me was the pegs hard truck on the wavy “w” rail. I thought the behind angle did a great job emphasising its shape; and I love it when a spot gets me just as hyped as the trick. True to form, Dan delivered a mix of jaw dropping smith and hardway manoeuvres; and I was especially floored by the ice hard 3 on the curved flatledge.

Opening his section with a good dose of humour, Jordan keeps the stoke high with his unparalleled breadth of regular and switch combos, often lacing 3 or more grinds on the single setup. From the get-go I’ve got a smile on my face, allowing English hip-hop group “The Streets” to encapsulate the spirit of the part with their track “Going through Hell” as I watch and laugh at Jordan goofing around before eating the concrete on a sticky hanger.

Don’t get the wrong idea though; Jordan’s a menace on big setups too. How he managed to pull that pegs hard 3 around will forever remain a mystery. If you’ve watched the video, you know the one I’m talking about. I loved seeing the reaction from the rest of the crew, and at least for me, that should’ve been the ender. Other standout clips include the unluc-e hard 3 and the pegs easy around the U-turn rail - it was cool to see a return of the wavy “w” rail too.

Oh man. Here we are. Final section of the video and we’ve still got 15 minutes runtime. This is going to be a big one. As with Dan, 2020 has welcomed the release of multiple Felix videos, so I’m both curious and excited to see how this one fares against his other 2020 achievements (namely his “Strange Times”, “Eclat X DIG” and “Etnies Pro” sections).

Never one to release anything sub-par, Felix delivers a 4 song mind-melter, and a well deserved last part. Despite its length (just over 11 minutes), Felix keeps you on the edge of your seat, struggling to predict what’s next with a refreshing mix of tech, style and gnarly. And whilst I’m not usually one for heavy rock music; I think that the 2nd track (by “Show me the Body”) was a good contrast to the slower pace in the first song.

Complete with various 5 piece combos, Felix’s part certainly demands a 2nd viewing to properly comprehend some of the technical lines and ledge clips. Having said that, I loved some of the simpler tricks in which Felix’s style really shines through; such as the full cab over the fence, the fastplant table to start a line, or the turndown over the red-brick box jump. Nonetheless, while the part never feels unnecessarily long, I thought that a couple of clips probably could’ve been culled. For example, the second fakie-7 seemed like a one down on the fakie-7-to-fakie, and the 2 fisheye angles of a straight crook could probably have been 1.

That ender though, HOLY MOLY PEGS HARD 3 WHIP!!! (We're sure you'll have heard about it by now but it still needs to be seen to be believed). Felix is goddamn machine, and his “Out Of Line” section sits at the head the pack, inspiring a new generation of technical street riding.

If the sections brought the heat, then the credits brought the vibes as we close out WTP’s 4th DVD with a mix of hi-jinx and behind-the-scenes shenanigans from the crew. Despite hailing from various corners of the globe, “Out Of Line” does a good job relaying the sense that these guys are a tight knit bunch, rather than simply riders of the same team. As the video cuts to black, I’ve got a big smile on my face and can’t wait to rewatch some of the standout clips.

At least for me, I think VX was a good choice, especially on a project where there’s multiple filmers. Filming everything VX ensures consistency across the board, wherein you don’t have to worry about the various HD setups of different filmers potentially hindering the flow of the video. With Grant Castelluzzo behind the lens for much of the project and Paul Robinson in the editing room, I thought the filming and editing were great with a good use of second angles and solid soundtrack. Although the video missed the buck in this year’s NORA “video of the year“ nominations, it’s great to see Felix and Dan’s hard work appreciated as nominees of the “reader’s choice” category. Filming a full length is no easy feat, and you can tell that each of these guys gave it their all. Congrats to everyone involved! - BEN NORRIS

"I think VX was a good choice, especially on a project where there’s multiple filmers. Filming everything VX ensures consistency across the board, wherein you don’t have to worry about the various HD setups of different filmers potentially hindering the flow of the video." - Ben Norris

Buy the WETHEPEOPLE 'Out Of Line' video, and merch here: https://wethepeoplebmx.de/outofline where you can purchase the video in two formats. One is a USB stick that can be played on a computer or smart TV and the other is a digital download. There is also a 100 page “limited” hardback book of photographs from the last 2 years of filming. 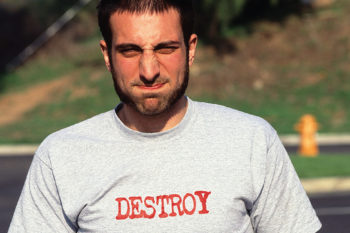 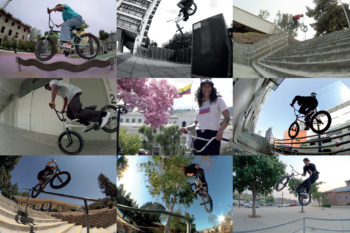