Party Arms? Learner's Permit? Which one are you?

Have you ever been called a BMX Bandit whilst riding your bike?... Maybe Dave Mirra?... or even Tony Hawk (trust us, it happens)? Nicknames are everywhere man. It's what the general public gives us to identify the group of people on 20 inch bikes riding through their neighborhood... Truth be told; We as humans love making up names for stuff. If we can turn it into an alliteration, even better. Alliterations and nicknames can improve memory of intricate ideas and it makes riding more fun. It's a win win. Here's a few of my favourites but feel free to tell us yours...

1. Tech Support | adjective; to be given advice from your friends while you try and land something.

Getting hints from your friends about how to land a trick or ride a spot can be really helpful. Seeing your homie land something you helped him figure out can be really rewarding too. Tech support is what I call it. Sometimes you may take so long to land something that the whole crew is spitting out their rendition of what needs to be fixed to get the move done. No need to dial that 1 800 number at the bottom of your screen.

2. Learner’s Permit | adjective; to land something for the first time sloppily.

Have you ever spent an extended amount of time learning something only to land it sloppily? Don't feel like trying it again? Good enough?Call Learner's Permit. Whenever I go to battle learning something, or trying something new; I'm picturing it dialed in my head. Sometimes if I battle for a trick long enough, I'll take it however I can get it. I've always prided myself on trying to be clean with my riding but sometimes you just gotta call Learners Permit. Pick your battles.

3. Curb Appeal | adjective; to think a spot is rideable from the car.

4. Extra Inning | noun / adjective; to give something three more tries before giving up

Knowing when to hold 'em and when to fold 'em is one of life's many lessons. The Extra Inning is the most widely used nickname that my friends and I say. If you're not familiar with baseball, you get three strikes before you are out. Such is applied to riding your bike. After trying the same thing possibly hundreds of times, calling an Extra Inning is an easy way to say "I give up, but not without a fight". Sometimes your friend can be ready to give up on a move / clip and you still have faith they can land it. An Extra Inning will give them less pressure to get it done before moving on to the next spot.

5. Party Arm (s) | adjective; to flail one's arms about in a party-like fashion.

Whether it's the new kid on the block or a seasoned vet throwing themselves down a flight of stairs, no one can escape the grasp of the Party Arms. Typically, one can replicate the Party Arm by sporadically twisting the bars back and forth upon landing (you know... getting squirrely). Party Arm-ing can happen anywhere, anytime. It's one of BMX's funniest phenomenon's. Similar to a speed-wobble, a Party Arm is it's slower, more confused cousin. Somewhere between "I have complete control of my bike" and "I had no idea how I rolled away". An example of this is if you watch any "regular person" try to ride a bmx bike for like ten seconds. All they do is Party! Party Arms is also possible while riding fakie (perhaps even more frequent) - some people refer to it as google searching I believe.

Somewhere between "I have complete control of my bike" and "I had no idea how I rolled away". 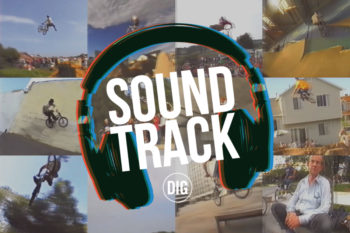 If this doesn't make you want to go and have it then you're dead inside... 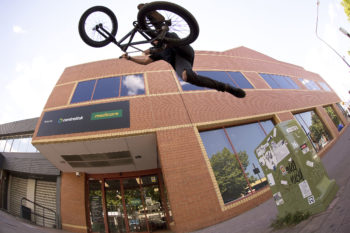