Not Bob or even his bars. Cool photo though. Animal Brooklyn Banks Joe Tiseo Jam, September 2004. Photo by Ricky Adam

Skapegoat handlebars sold out in less than a week with no promotion from any BMX sites (that I know of). They are less than 8 inches in rise (7.80"), they are narrow (25") and they have a minimal backsweep (8 degrees) with an assload of upsweep (5 degrees). By BMX standards of today, they are so not cool, but that didn't really matter. Empire BMX, together with team rider Bob Scerbo, saw a need that was vacated by Animal Bikes moving from the original Bob Scerbo signature handlebars to the Animal Big Four bars, filled it, ordered a batch of bars from S&M, and lo and behold, sold out of them very quickly for a handlebar that is less than an inch below the cool guy height for handlebars in these days.

I should return to Bob's original signature bars with Animal, which made their first US-made appearance sometime in 2005. Bob's signature bar with Animal, based off the original GT bar of the early 1990s, was lighter, stronger and came in the sickest brown color I've ever had on my bike. Everyone at the time rode two-piece bars, and if I were to take an outside look in, I may have thought, "What the hell is Animal doing?"

"Bob will hate me for saying this, but he was/is an influence on a very specialized group of bike riders that explored, adapted and defined a generation of BMX."

Fortunately, I was on the inside. I saw Bob's riding a lot, and his approach to riding, paired with his bike setup, became recognizable in videos in the New Jersey area. He had (still has) a pop, he rode fast and he adapted. His bike was an extension of him and as it slowly but surely evolved (brakes gone, freecoaster and two additional pegs added), he retained the bars, the inattention to sticker detail and the rust. I know he never intended for it to happen, but his riding eventually influenced a lot of BMX riders to want to adapt his setup because they were not yet capable of doing 180 to backwards icepick on a rail in Philadelphia. Again, Bob will hate me for saying this, but he was/is an influence on a very specialized group of bike riders that explored, adapted and defined a generation of BMX. (I'm ignoring storm doors because it's so cliche at this point, but you can thank probably Bob…)

Sometimes he walked away from a spot and saved it for people that he knew could wrangle it, sometimes he just cruised for the entire day and made mental notes of spots, sometimes he drank on his porch and talked shit till 4 a.m. and blamed it on bike riding. I'm not trying to write a bible on my friend, I've just always appreciated his 'take it as it comes' approach to bike riding. Bob Scerbo has never forced anything in his bike riding, except that one 180 on Road Fools, and to his credit, he said he'd never go on another one (which he held true to.)

A few years back, after Animal Bikes was already producing a newer, lighter, better brown color of Bob's signature bar, people decided that their backs and wrists were starting to hurt because of smaller handlebars with less sweep. They made a bigger version of Bob's bar and he asked them them to remove his name from the product because, if he wasn't riding his "signature" dimensions, how could it be signature?

"Do you want to be a 41/42-year-old flatland rider that fails at everything?"

First batch of 2016 as seen on the Empire BMX insta.

I always respected that perspective, while pushing the BMX market trends of the day away. But...

If you hold your arm straight out, your wrist doesn't bend 12 degrees to the left or right (nor does it does it for 8) but less sweep has become the "skapegoat" per se for the naysayers. And if you look at modern day bike riding in videos, it's plain to see that bigger handlebars has instilled this straight leg, stick your butt out stance that demands force from landing to be transferred above the midriff to the back, arms and shoulders. Essentially, if you're a little hunched over, your knees are bent, and your entire body is absorbing the force of impact instead of your upper body. But not now: people straight leg everything and transfer the force to their upper body and extremities instead of equally distributing it. (They 'big butt' it -- their backs are gonna die quick deaths.)

No one needs to agree with this but I've talked about it with an anti-bike bio-mechanist and it makes sense to me: Bigger bars are gonna kill your back and hyper extend knees more than your average-sized bars of ten years ago. (They're anti-bike because it puts your body in an unnatural position -- I see their point but I'm also a little too invested to walk away at this point.)

But I digress. I still ride a 7.80" height handlebar, I stretch regularly and I've made it pretty far in bike riding without any major back or knee blowups (I'm 42 this week). And again, I'm also a little biased -- I've ridden Bob's Animal bar for the past ten years and it feels great, looks even better. Do you want to be a 41/42-year-old flatland rider that fails at everything? Probably not, but if you like Bob Scerbo and/or Empire BMX, they made a batch of handlebars to celebrate his riding, his influence and his grassroots approach to BMX riding.

It sucks that more people aren't excited about it, but at the same time, I'm glad. There's a niche, and it's being filled. - BT

"Sometimes he walked away from a spot and saved it for people that he knew could wrangle it, sometimes he just cruised for the entire day and made mental notes of spots, sometimes he drank on his porch and talked shit till 4 a.m. and blamed it on bike riding." 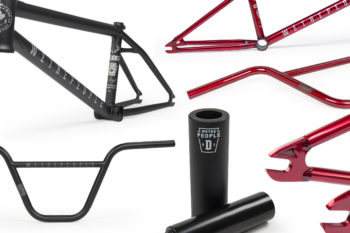 Looking to get buck bud? 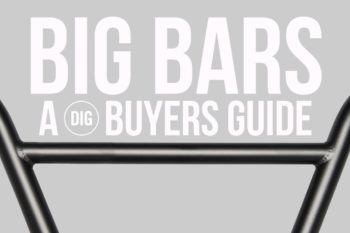