"something more than family"

As Will Stroud just hit ten years as Cinema’s TM it’s no surprise that, after those years of traveling and working together, this crew has become something more than family. This crew has shared blood in the streets, drinks, long nights under the lights, hours at the hospital, miles in vans, and yet some how everyone always has each other’s back to the fullest. You can see that clear as day when, rather than any jealousy over this spot or that spot, this trick, etc, this crew has seemingly learned to celebrate and enjoy each other’s difference in habits and mannerisms. Something that shows in both the footage and photos naturally. You can laugh all you want at all of the endless CK Instagram memes, Corey saying “y’all” way too much, and I assure you we are all in the van laughing our asses off along with you. For this is truly family and I have now doubts that everyone will continue to embrace each other while pouring blood in the streets together for many years to come, all for the sake of friendship and growth.

Maybe that is why Will chose Detroit for this one. Because much like Cinema and life in general, Detroit has seen its ups and downs, its wrecks, its blood on the streets and much like the Cinema crew it has only grown stronger as a result. Even in its ‘roughest’ areas Detroit had this energy and friendliness about it. Not just walking by looking on in weirdness at 7 grown men sitting on the side walk with little kids bikes. Instead everyone we ran into was fully stoked and supportive of what we were doing. The one time an officer did have to kick us out it was more of an apology than a scolding. So for that I thank you, Detroit, you were far more than just a city built on roads, rock & roll, and those long, hot summer nights. Not to mention that Michigan has some serious spots and the locals are nothing short of true BMX family welcoming us to their city with open arms (shit, I think I might even still have a tab with a local!)

The second we pulled up to this spot I knew it was going to get ran through quick by the crew. Garrett started it off with this crank to crook switch whip.

Never underestimate the short guy, Corey came in quick with this back crook indian, in under maybe three tries.

As we headed out for this trip, myself and Harley met Will in Detroit after I made Harley pull the six hour drive from Rochester so I could enjoy the fresh air and music. Once we met up with Will we quickly learned that Garrett and Chad’s flight was canceled and pushed back a day and that Nathan (due to a bad back injury) needed to stay back an extra few days to heal up. This was of no issue to us, we had a great place to stay and a new city to wander around. As Corey showed face the next day and we grabbed Garrett and Chad, it was on. The city really felt wide open and welcoming. With the energy right and the nightly porch missions going well we picked up Dak who was flying in late direct from Germany, a true professional. I would’ve personally tried going home for 48 hours to chill first but not Dak. This only increased the energy in the van leading to an amazing few days of riding around the city. With Nathan coming in for just the tail end of the trip we ended up saving those days for driving missions going spot to spot on the outskirts of the city to hit all the gems we had yet to get to. None of us even knew if Nathan was going to be able to ride much less film anything. But this is Nathan and it comes as no surprise to any of us that the good times helped him break the ice, feel better, and even snag a few clips in just two days.

Chad ending the session moments before heading off to pick up Dak with a back crook 180 crook bar, after probably doing 4 amazing tricks while figuring out what exactly he wanted.

Detroit, I know we all can’t thank you enough for the great spots, locals, and all the good laughs. This is sure to be one of those trips we will all remember for years to come, and not just for the spots and the tricks, but for the great times laughing non-stop with friends on bikes. Hopefully these photos lead to more great memes for us all to laugh about. Thanks again, Detroit. Next time let’s get Robocop back out to hang. - KC

Corey mid Instagram filming for the kids, with a quick downside double pegs.

A G at work. Garrett seems to be a constant in almost any photo I want to shoot, and - seeing as I’m from the east coast - if there’s a jersey barrier around I want to shoot that. Shouts to Garrett for once again doing work, just for my lens.

Never one to just take the easy route, I saw Dak simply grinding it and just wanted to shoot it., but before I knew it (and right after this was shot) he did a line right out of it. Can't win them all but this height of a grind is enough for me.

Damn! T Nez with he lofty boost. This thing is much longer and sketchier in person.

Watch the edit to get this one. it's not just 'another' smith nose bar, it's a line ender, and there's actually a nose manual in.

After baking in the sun for a few hours, Garrett was the only one who really felt up to riding this long rough hubba in the blazing rooftop sun.

Garrett once again blessing us with a seemingly perfect whip.

I have always loved the way all white looks in night footage, and now thanks to Dak and the Detroit blues, I am loving it day AND night.

Left to right and around the bend. Chad has family in town and cut short this day to catch up with them. Probably a half-hour after he said he wanted to get going, he looked at Will and said: "I think I got something I want to get first." In true Chad style, he pushed through the long line, laughed, freshened up, and he was out. Always professional and never a slacker.

Corey has got to have one of the deepest bags of tricks in the game. Here he is bringing one back, just for the sake of the photo. Thanks Corey!

This building is nothing short of disgusting and the second you walk in your throat tightens up, breathing in the years of settled muck. Luckily Corey got this right away and we were out.

Yup, there is that all white I now love again. This spot was hilarious. It was right on the water path and endless characters walking by sharing their thoughts.

Garrett has some of the best three toboggans in the game. Rarely seen, but always appreciated

Dak enjoying one of Detroit's true gems of a spot, with a quick mollie hanger.

We actually went to this spot twice for Chad to get an NBD, and after hours of trying and giving it his all, the heat and light got the best of him. But there is no doubt in my mind once the right spot for the trick is found we will all have our eyes blessed. Here's Chad grabbing a clip before going in with an ice up over switch bar.

Garret with a bar ice easy 180 between all the sessions that went down.

This Hubba is big and this noise picture well past good light def doesn’t do this feeble-hard justice.

A storm started to roll in fast just as we got to this mid knobbed rail, luckily that was only motivation for Dak to lace this one as the rain started to dump on us.

"The city really felt wide open and welcoming. With the energy right and the nightly porch missions going well we picked up Dak who was flying in late direct from Germany, a true professional. I would’ve personally tried going home for 48 hours to chill first but not Dak."

Like I said earlier, jersey barriers are the best, plain and simple. Another Dak line starting with a proper hop over and in.

Dak with a quick hanger 180 whilst thinking of even more option for this 'poor run-up' kinker.

Is any kink rail really safe from Dak? Quick hanger to pop over nose bonk.

"Idiot photographer leaving his flash hardly in the corner. Sure it could be photoshopped right out but we all make mistakes so let's admit them and learn. Luckily with Will standing over me while shooting Garrett made no mistakes and did this over tooth twice perfectly."

To say this spot is a gem is an understatement, and to say it got sessioned heavily is even more of an understatement. The second I saw Chad jump onto it nose I knew it was over, just from the look in his eyes. After a lot of work, it was done to perfection.

Ol' Willy is back! You may not know it but Nathan was out for a few weeks due to a bad back injury and luckily this ice breaker went perfectly - giving him some serious confidence back allowing him to grab the manual to 180 up in the next photo.

Never one to fully be satisfied, and after he'd already did tires to a super lofty truck, Garrett announced (when we were starting to pack up) that there was more to come. "Hey, I think I want to 180 whip that and just toss the truck." Thanks for always being motivated G!

"Detroit has seen its ups and downs, its wrecks, its blood on the streets and much like this crew, it has only grown stronger as a result."

As with rails, no wall is safe from this guy ether. Dak lacing the rail hop to wall first go and perfectly. 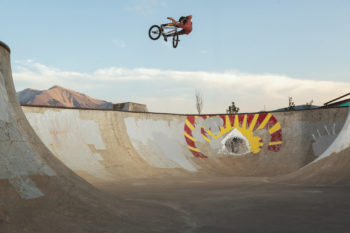 GIVE IT HELL! Fast & Loose in Colorado

Deep and steep, straight up the guts... 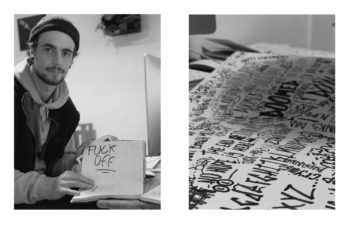 Embracing the Chaos and Destruction - The Doomed Story