"I'm always looking for the next best spot..."

Justin Hughes has been in the Montreal scene for what feels like forever so you can quickly forget about how young he actually is. Dubbed as Dillon Lloyd’s protégé in his earliest years of riding, he’s definitely moved well beyond being a wingman into the tech street shredder that he is today. Of the younger generation of Montreal riders, no one knows the streets of Montreal better than Hughes. With a big year in the works, it’s fitting he starts it off with this DIG 'Youth of Today' piece.

How long have you been riding and what got you into it?

I’ve been riding for 6 years now. I remember always having a BMX bike but never using it because I was such a small kid. One afternoon I was (skateboarding) and all my friends from school were at the local skatepark, the older kids immediately started bugging me about how I should ride my bike more. I went all the way home and got my Mom to bring it outside for me (since it weighed more than I did at the time) and pedaled as fast as I could back to the skatepark. Once I was back riding it there, I remember laughing and riding with everyone trying the most impossible things. I remember waiting for my turn to drop in feeling like forever, I was so excited to blast the quarter pipe back and forth all day long. I never wanted the day to end and I never wanted to be off my bike again.

About a year later I had a school trip to an indoor bikepark know as UAB, ran by Liam Mulrooney and Jason Herman. This bike park happened to be really close to my house, the next day after school the first thing I did was go directly there where I met Dillon (Lloyd) for the first time. I remember using Dillion's Bike every opportunity I got because it's was so light haha. I eventually got my own high end complete bike from UAB (which happened to be a WTP envy) and from that day on I went back every single day until they closed their doors.

So it's safe to say you were riding more ramps than street at that point. When did you transition to more street?

The skatepark was always the spot where we would ride the most but I really didn’t know you could ride anything other then ramps/skatepark until some of the older dudes let me tag along and cruise around town. Eventually UAB, the indoor bikepark we all loved dearly closed down so we had to ride elsewhere. Luckily le Taz V2 was nearing completion, this park was huge and very street oriented. Adapting to the new park was weird at first but eventually my style started changing just because of what it was.

Who we're some Montreal locals you started riding street with and when did you really start getting stoked on that and MTL spots?

Montreal had a pretty crazy BMX scene when I started riding so the list of riders could be endless. There were a couple dudes who really stood out to me, who I really liked riding with: Greg flag Eric trepanier and Corey Dewey. These guys straight up killed it and rode completely different than anyone I've ever seen. Eric ended up moving into my neighborhood and we started riding together a lot. He'd always encourage me to film clips on his VX1000 I'd say that's what really caught my interest for filming and riding street.

Did you get to know most MTL street spots through those guys or how did/ do you do your searching?

Sure those guys showed me a fair share of spots but I pedalled my ass around the city searching everywhere as well. Whether I'm cruising or going to a friend’s house, I'm always looking for the next best spot. There's no better feeling then finding a new spot, especially one nobody's been to yet.

Nowadays most riders/ teams coming through MTL hit you up to show them around, how did that come about?

I think it's just cause I'm down to shred and take the time to show people around and have a good time. Honestly Dill shreds spots and people tend to hit him up first but doesn’t know his street navigation too well. If you've ever met him you know what I mean (lol). That's why I'm around when most teams come to town.

Montreal's lit. Straight built to party what else is better than riding tons of spots all day, just minutes between each other and then cracking a couple beers with the homies and hitting the town with multiple bars/clubs at every corner.

Montreal's my hometown so it's hard not to love, the beautiful woman great food and overall culture is one of a kind. The scene hasn't been as active as it used to be but I try to stay positive and keep everyone around me motivated to get out and ride.

What/ who are some of your biggest influences/ motivators in riding?

I've always loved watching Alex Donnachie and Bruno Hoffman ride, there crazy technical styles have always caught my attention and given me a thrill to ride.

If  you could only watch 5 edits or videos for the rest of your life, which would they be?

Who are some of your fav dudes to cruise with?

Fuckin' love getting out with you guys, hahaha.

"Sure those guys showed me a fair share of spots but I pedaled my ass around the city searching everywhere as well. " - Justin Hughes

Give us a solid Dill (Dillon Lloyd) story or two...

One day me and Dillon were heading back into the city from his place driving his 1993 turquoise Honda Civic when suddenly the front wheel started making noise. At first Dillon thought it was just the brake pads rubbing so he started jolting the steering wheel back and forth to hopefully solve the problem but the noise just got worst. He then sticks his head out the window going 100mph on the highway and loses his "favourite" hat. He instantly freaks out (in typical Dillon fashion) and wants to stop the car to go look for this hat. Obviously that was out of the question so we continued down the highway with the noise only getting louder and Dillon getting more frustrated. Switching lanes and violently ripping the steering wheel around, we eventually reached our destination Dillon and myself got out of the car and checked out the problem. We took off the hubcaps and the wheel was about to fall off. Every single bolt had unscrewed and the hubcap was the only thing holding everything together. Thankfully we made it safe and sound to the city and nothing dangerous happened with Dillon yanking the wheel all around town.

I'm trying to travel and experience as much as possible just turning 21. Finally having a camera at my disposal makes filming and flying a lot more convenient, hopefully everything goes as planned and I make this year one to remember

I honestly can't thank We the people OGC and 514BMX enough for everything they do to keep me rolling, DIG for letting me do this, shoutout Vlad at imported BMX for always filming me, Jeremy Deme for always holding it down and a special thank you to my mom for always being super supportive and encouraging. 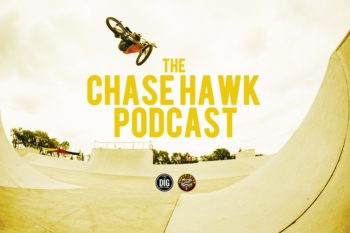 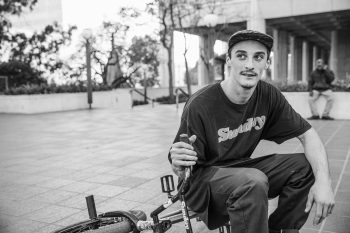