"There’s more people riding for sure, but all those people are trying to do the same thing."

Seth’s bike, more or less unchanged for nearly a decade, has become accepted as the standard street setup (minus the 4th peg). On this bike, Seth helped progress street riding to what it is today. Who else would touch a X-up to hard 180 down a rail back then? Equally progressive is his smith hard 180 bars in Red Bull Mean Streets. DIG caught up with Seth recently and got the scoop from his own very deep and drawled mouth.

What got you into a freecoaster?

Definitely Bruce Crisman. At the time I was hanging out with him nonstop. We were playing music together nonstop. He was always getting on me about a freecoaster. I put one on and it took me a little while to get into it.

Was that before Shane [Weston]?

Shane always went back and forth like with pegs. He was on one here and there, I don’t know. It was definitely during the Facad days. Bruce was doing tons of fakie stuff down stairs. He made it look so sick.

Do you think you had what would now be considered the standard street bike now before everyone? Fatter pivitol, two pegs up front, freecoaster. But you’ve never been four pegs right?

No, [four pegs] got big maybe three years ago? When those started coming back I kept trying to run ‘em, but every time I’d try to bunnyhop it would peel my shoe off. So I gave up on it. Other than that I’ve had the same setup since the beginning.

Corey called it, saying the whole world will be four pegs. And I said no way, it’s just way too clunky. But he insisted, rightly. I guess people are so good now they need more options.

It’s sick to see it. I kind of look forward to it going away. Everyone’s getting into switch grinds and stuff, but sometimes I feel like it’s taking away from so much of riding that I like to see.

What do you think about the current state of street riding?

Uh, I don’t want to be mean. It’s progressive, there’s definitely stuff going on, stuff happening. But to me it’s all the same stuff going on.

Do you feel like it’s because there’s more riders? Compared to ten years ago, or are the trends just narrowed?

There’s more people riding for sure, but all those people are trying to do the same thing. They’re trying to follow what’s the newest trend.

What are some things now that you’re psyched on? Anything specific that you didn’t think you’d see years back?

Just to see the stuff he posts. It’s mind blowing to me.

What’s your riding now? What’s getting you stoked?

I’ve always been more of a slower rider. More tech I guess. Lately I’ve been wanting to ride a little faster and just be a little more open minded. Get away from tech tricks.

Cranks: Shadow killer cranks. Usually running my signature noctis cranks. Just thought I would give these a try.

"I'm only running two pegs right now. I had been riding pegless for a little bit just for a bit of a change. At some point I lost my third peg, and have just been too lazy to take the time to put another one on haha!"

10 hour days in the streets of Oklahoma City - More Info 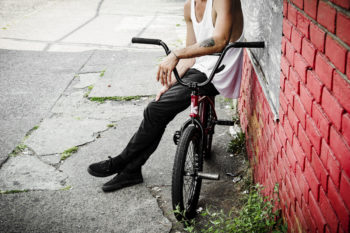 A new Colorway for a Jersey Devil 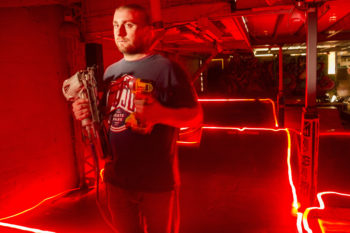