Maybe there's a silver lining around the COVID cloud...

Interview and photos by Rob Dolecki.

Who knew a global pandemic could be a blessing in disguise for the BMX industry? While COVID-19 has essentially wreaked havoc on most retail outlets and restaurants, bike shops overall have been generally immune to the financial woes striking millions of people around the world. In fact after a decade of a roller coaster ride filled with heavy dips in sales, many have had their best sales numbers ever.

What’s this all about, and why? During the “Upstate Of Mind” trip with Nathan Williams and Hobie Doan, we met up with longtime KINK salesman Chris Riesenberger and got his educated and informative perspective on the whole situation.

What were your initial thoughts about what Covid-19’s effect would be on the bike industry when it hit?

When everything started in China, it was during the CABDA Bicycle trade show in NYC. Things started getting weird just as it began. The show was at the Meadowlands in New Jersey (during the second week of) March before any lockdown. I went to New York City with Chuck Goldy and Ryan Swartz from Kink, Moeller and Dougie from The Building, Chad from Powers Bike Shop. The hand sanitizer and washing hands was just starting. We were being us, though. Going out to eat, partying, not worrying really, and then shit hit the fan. We realized we were probably in one of the worst possible places in the world we could be and had really taken some risks. My wife called me crying when I was in Binghamton on the way back home, “I just went to the grocery store and there’s nothing to buy.” I was able to buy pretty much anything we were going to need in Binghamton, luckily. I got back to Rochester on a Thursday night. Friday morning Zack (Kink owner) calls me and says, “Don’t come to work. With everything you guys just did, you need to go into lockdown because you could be sick.” Talking to the guys at S&M, we literally thought we were going to die. It was probably the longest two weeks of my life hoping we didn't catch it. After the two weeks were up we were relieved. “We’re not dead!” I remember our sales manager came over to my house and slipped a laptop through a crack in his truck window, and said, “Stand back.” That was the beginning of my life changing forever. I always wanted to work from home, and it’s never really been possible, because I wear a lot of hats at Kink, since I’ve been working there for 19 1/2 years. The thought of me not being in the building was a little scary, and then it forced me into it. A lot of people are good at working from home, and a lot are not. It’s a personality thing, but I just thrive in it. It’s everything I always wanted. I love my house; it’s very relaxing, and being completely focused by myself. It helped our business a lot. At this point, I still haven't gone back to the office.

In the beginning I thought we were all going to lose our jobs. I was nervous, because a large amount of people depend on us for their income. I didn't even consider the possibility of the bike industry being considered essential. That didn't seem realistic at the time. Personally, I had a little bit of money saved, so I paid off our house quickly. I was already setting myself up to not need a lot of income, so I could get by for a while if I was unemployed. We kind of started making jokes when the toilet paper thing happened. “I want to be like toilet paper.” Then all of a sudden we got busier and busier. and bike parts became like toilet paper. After the first month it went crazy. I went from working 10am-6pm, to 7am-11pm every single day. I didn’t have anything else to do, because I was home, so I just worked my ass off to keep up. Within a month of it, “I didn’t want to be toilet paper anymore.” (Laughs) “Make it stop.” It still hasn’t stopped. It's to the point where we sold most of our inventory and now the whole industry has shifted. Calling and placing an order is not a thing anymore. Everything is pre-booked now, even tubes. I’ve been in the industry since 1993, and I’ve never seen anything like this. We’re in 2020 right now, and pre-sold out of 2021 bikes. Everything in our lives has changed, and probably will never going to be the same again. It’s really weird. There are a lot of questions in peoples’ heads about what happens next. Nobody knows the answers.

Is it more a hiccup in Asia’s availability production-wise, or primarily just an exponential increase in sales?

Asia shut down for about two months, but that was before it got crazy here in the US. They were getting back to work while we were shutting down. It did affect delivery times but not by much. We are now sold out of everything for a bit, so it’s interesting how, as a company, you choose to handle that. Your growth opportunity is huge right now to lay a long-term foundation for the business. The last thing I personally want to do is just dump all the products to one or two customers and take the easy way out, but some companies have chosen that route. Why not give every store a little taste and share the success of the brands? That's how we’ve attacked it, anyways. It has changed how I have to think about things when ordering. Any sales reports you could run aren’t dependable now, and the last thing you want to do is get greedy and hurt BMX, but the temptation is there. I’m trying to be super-responsible about the way we consider our ordering. If I had 20,000 more bikes right now, they’d sell out in a day, but if I order those now, and they come in three months, the situation might not be the same, so it becomes risky. As an industry, we need to be very responsible right now for the future of BMX, and not just think it’s going to be this way forever, and over-order. I don’t like having product sales, so I'm trying to avoid excess. I think having sales all the time will devalue a brand. We haven’t had sale bikes in six years, and that's hard to do. I’m a true believer in the IBD (Independent Bicycle dealer) and they need solid margins to survive. Your customer relationships with IBD shops are really where you see your strongest growth that supports your future.

What do you think is the reason for all the craziness?

Parents probably don’t like their kids as much as they thought they did, once they were stuck at home all day. (Laughs) I'm joking. Obviously an outlet for health and exercise. It makes me really happy to see; I'm an everyday bike rider guy. It also has to do with keeping kids busy. A lot of parents are working from home, and they got to give them something to do.

Do you think this is temporary, or is it a long-term change?

I think it’s temporary to some extent, but after this many new faces were introduced to BMX, I hope a lot of them figure out what we already know and stay with it.

Do you get a lot of inquiries for masks?

Weirdly no; not yet, at least. My opinion of the mask is that I’m completely willing to wear the mask all the time whenever I go anywhere, because I would never risk harming others. It's the responsible thing to do and you’d be a complete moron not to wear one. For a company, I think it’s your duty to use your platform to teach kids that.

Being that the industry as a whole seems to go through pretty significant fluctuations over the years, do you think we need more pandemics for BMX sales?

What we’ve just had happen in the last few months has put a lot of money in a lot of good people's pockets. Especially those rider-owned stores that are used to struggling a bit. The increase in funds for them really gives them so much going forward. Their stores are stronger, more secure and they have more buying power now. Even placing simple orders where they can hit free shipping allowances more often gives them better overall margins. I had my own store for 13 years. Every one of us who’s "that guy" which owns a store that chooses to commit to BMX...you’re not getting rich. There’s a labor of love involved there. Having financial support in your business is just so huge. Going forward, it’s going to strengthen BMX to a level we’ve never seen and I LOVE that thought.

NW and Hobie on a rampage... - More Info

KINK is an Official DIG Partner 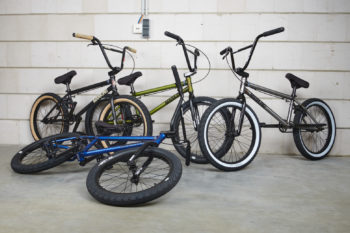 You better believe it's a new wave 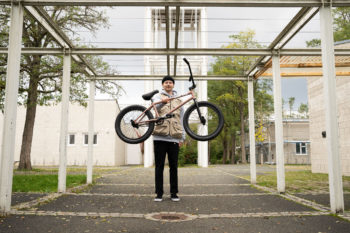 And his KINK Williams frame