Opinionated: In Defence Of The Bashguard

"In a way, I think this is part of BMX becoming comfortable with its dark days..."

Many years ago, when DIG was a print magazine with a barely functioning website on the side that served as a destination for readers to subscribe to the print magazine, I approached Mike “Rooftop” Escamilla about doing a full-length interview in the magazine. This was in the years surrounding the release of the etnies video “Forward,” and Rooftop was one of the most well known and established pros of his generation. He was also notoriously known as outspoken and sometimes, a little high maintenance when it came to filming or shooting photos. I didn’t care about any of that. Admittedly, I’ve been a lifelong Rooftop fan and just wanted to get him on the record being honest while probably shooting some outlandish photos.

He wanted to shoot a rail dressed as a ninja.

It never happened. I remember Mike wanted to shoot a photo doing a rail dressed as a ninja, but we just didn’t have anyone in Southern California with the time to shoot the photos. Well over a decade later, it still hasn’t happened. And something unexpected happened with Mike along the way. Despite his status as a legitimate legend and despite his catalog of amazing video parts, he lost most of his sponsors - BMX kinda spit him out when he wasn’t producing enough anymore, and Mike had to go get multiple jobs performing stunts in movies. I know this BMX thing is cyclical and that there isn’t a lot of money to go around, but with the people I call legitimate legends, it’s tough to see them tossed aside after middle age arrives.

But not all was lost, even after Mike had basically given up on the BMX industry. Ian Morris added Mike to the United Bike Co. team in 2010. He was 32 at the time and it was a no pressure agreement. Ian simply had an appreciation for Mike’s legend status and wanted to recognize that. End of story and proof that not all is wrong with the BMX industry. Mike released a series of video parts for United throughout the years, always reminding us old fools that not only has he not lost it, but he was still learning and growing into an even more amazing bike rider.

Getting comfortable with the dark days.

For every BMX rider in their middle to late 30s and 40s, bashguards were a unique occurrence. They signified the arrival of street riding as legit and something that needed to be addressed by the BMX industry at the time, but they were also kinda forced on the riders of the time as the next trend. They also signified the start of a new generation of rider-owned brands aimed at street riding, but again, bashguards were kinda forced as part of the new paradigm. And around the same time, the arrival of bashguards coincided with a strange purging of top paid pros, magazines, contests and legitimate ways of making money as a BMX rider.

Basically, it was awesome that street riding had finally arrived in the eyes of the brands making BMX bikes, but it seemingly happened around the same time that the bigger brands started to bail out on a market that was quickly imploding on itself. "Hey, street riding is cool, here's a bike that you can bunnyhop to disaster on, it's gonna break soon though, you don't really need it anyway, and we're not going to be around to answer warranty claims. Have a nice day!"

Maybe the bigger brands of the time didn't understand street riding and wanted to cash in on the next trend? Or maybe BMX had just coincidentally reached a point where it needed to cleanse itself of its checkered past before it could move forward in a more soulful direction? I can't say -- I was on the outside looking in through a magazine that ceased to exist when I needed it most.

It's no secret that modern day BMX needs dictated that a sprocket guard of the Havoc Sprocket Pocket type would make a return. Those arrived over a decade ago when sprocket disasters made a resurgence in the late '90s. Only they were alloy and bolt-on and not covering the entire sprocket. Sprockets are a different story though. Grinding/sliding on the bottom bracket was a concept Chris Day started to explore in the early '90s, followed by a slew of people I'm probably forgetting before arriving at Ruben Alcantara and Fly Bikes trying in vain to offer a bolt-on bottom bracket/bashguard that could slide/grind.

It never took off. Subrosa attempted to recreate a Bully-type bashguard, but it never went into production. A company named BMX Grind introduced a bolt-on bashguard in 2015, and again, I was never really sure that it was going to take off. Russ Bengston even wrote a dissertation about the phenomenon and it's still available to read.

But this Rooftop bike, I'm a bit more optimistic about.

For starters, this is not Rooftop's first foray into a bike with a bashguard. He had a custom-made Hoffman Bikes Deebo with one of the most luxurious welded-on bashguards that I've ever seen in recent times. And he did a lot of unique riding on it. Of course, Rooftop is not like any of us out there. He has never limited himself, he could give two fucks what anyone thinks about him, and he's a natural when it comes to BMX riding. He's also not trying to eek a meager living out of BMX, so he's able to do what he wants with a sponsor that respects what he's brought to the table behind him.

Do I think the younger generation of riders will go in on a new generation of bashguard frames? Of course not. Do I think that there's at least a few hundred people around the globe that would rather buy a United bashguard frame for $370 than purchase a used Bully off of eBay for $2000? Yes I do. Maybe it took a very long time to get there, with a lot of missteps along the way, but that's okay with me.

In a way, I think this is part of BMX becoming comfortable with its dark days, or it could just be a rider and a company saying fuck it. But again, that's okay with me. Here's to bashguards as an option and not something forced on us as the next big BMX trend.

And we still need to make that full-length Rooftop interview happen in one form or another. - BT

"Here's to bashguards as an option and not something forced on us as the next big BMX trend." - Brian Tunney 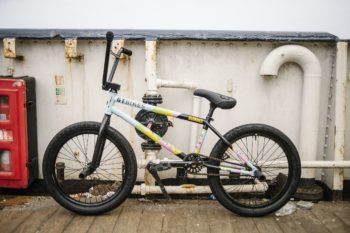 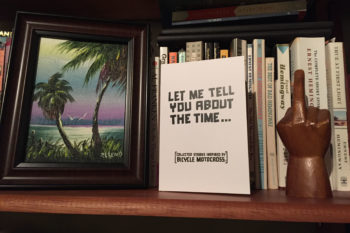 Print Matters: Let Me Tell You About The Time...

"Every contributor was effected by BMX in some way throughout their lives."