The Duganator's whip up close and personal...

Words and photos by Rob Dolecki.

Two Setups features in one year? When that happens, you know you reached a new level in Pro-dom. Since Tom Dugan's bike disappeared a few days after the first one was shot, we figured,- why not see what Dugan has changed up on his whip? Well, to be honest, it turns out not that much has changed. But we did also interrogate Dugan about his recent month-long etnies "Chapters" European trip, so please read on and see how his 2020 Olympic swimming team aspirations are progressing...

When/ How did your last bike disappear?

It was on a Miami trip a few days after the T-1 Ramp sessions. I was taking a piss ten feet from my bike, which was 30 feet from the spot where all the homies were at. It was gone in a matter of ten seconds. Everybody had overnight-ed me new stuff by the next day.

How is this one different/ similar?

Same thing, except the wheels. I had a freecoaster.

Are the pedals still your favorite part?

Mods on this bike?

Cut the bars down to 27”, and cut the steerer tube on the forks.

Have you gotten better at swimming?

Yes. I also now live five feet from a pool, so I’ll be swimming every day. I got to swim in a storm the other day.

How did the contests that you went to the last few months go?

How did the month-long etnies trip go?

Fun as hell, tiring as hell.

You rode pretty much every day.

Yeah, maybe two or three days that I couldn’t.

How is your "Chapters" part wrapping up?

I think good. Every time we are with Mike (Manzoori), it’s fun as fuck.

Going on a FIT trip (to Arizona), because Tony Malouf, the new TM is trying to drop an edit out by Halloween. I’ve only been on one trip for it so far. (Ed. note: This interview was conducted before the FIT Horror Picture video release the other week, in which Tom ended up having the last part) And also try to film at home for "Chapters".

Mr. Dugan entering his usual airspace in Bristol, UK; Larry Edgar, and Mike Manzoori's drone might have been only other visitors to that altitude here.

Battle of Hastings 2016 - The Official Video 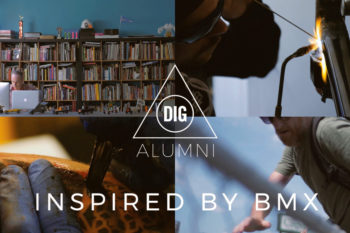 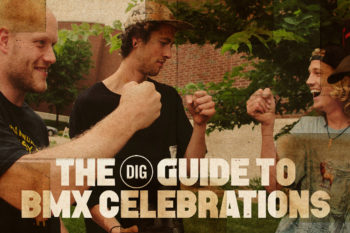 The DIG Guide To BMX Celebrations