Justin Schwanke and the story of one obsessive creative

At one point in my life BMX was a sport; an athletic endeavour if you will. I was a racer who wanted to compete. Over time though, my mindset shifted. The desire to arrive at the finish line ahead of everyone else dissipated. Gradually, I began to get more fulfillment out of the movements I made on my bike rather than the position I achieved in a race. Whether it was in practice or a moto, the smoothness of landing a jump, the railing of corners, the pumps over rollers, and the sudden bursts of pedal strokes became an element of artistry. It was the way in which I connected with my bike that excited me.

"My usual audience is the assortment of birds and gophers..." - More Info

At 18 years old and after 12 years of competing on the track, I quit racing. I did not, however, quit BMX. Racing was just one element of my BMX experience. Freestyle was something I’d done ever since I picked up a bike. As I matured, it became clearer that this longing for creative expression was best aligned with freestyle. And naturally, videography was the platform to document my passion.

Since then, I’ve become a bit of an obsessive creative. There are nights when I sleep only a few hours because I get in and out of bed to write down a trick idea, video idea, article idea, or business idea that graced my thoughts. Other times I’ll start editing a new film in the evening and become immersed in a workflow that keeps me awake until the early morning. I’ve learned that the worst thing to do is resist these bouts of artistic inspiration. You never know when they will come, or if they will come back at all.

"I don’t expect everyone to prescribe to this notion of BMX as an art form. People interpret BMX in many different ways and for many different reasons. "

I filmed this video in my backyard throughout the summer and fall of 2016. Every session involved one camera, a tripod, an archaic MP3 player, headphones, and my ever-expanding list of trick ideas (most of which don’t actually work out). My usual audience is the assortment of birds and gophers who take up residence in the backyard. On occasion though, my neighbours may watch from afar in confusion. I can only imagine what they think when they hear grunts of frustration as I ride alone in the same line for hours on end.

The most time-consuming trick in this video was the footjam crankflip to fakie to halfcab to quick footplant 360. That’s a mouthful, I know. I landed the move half a dozen times, but I wasn’t happy with how it looked until the end. It took nearly the duration of four Led Zeppelin albums to capture that line the way I wanted. I began with “Good Times Bad Times” on Led Zeppelin I and landed the trick while listening to “Going to California” on Led Zeppelin IV. Based on my calculations, that clocks me in at between 2 hours 41 minutes and 2 hours 45 minutes. My neurotic persistence can sometimes drive me to the breaking point. My mind is my greatest ally and my worst enemy. However, when I do indeed perform and document a trick as envisioned, there’s a profound mix of positive emotions. These feelings typically evolve from initial surprise, to relief, to satisfaction, and finally to fulfillment.

I don’t expect everyone to prescribe to this notion of BMX as an art form. People interpret BMX in many different ways and for many different reasons. That’s the beauty of this thing we call “freestyle.” Sometimes though—amidst an evolving world of Insta clips, vlogs, and webisodes—I feel the art of BMX is becoming lost. Suddenly we quantify the quality of content with views, likes, and shares. We assume that if a video has a lot of views then it must be good. However, quality itself can not be easily quantified. Quality is subjective and quality is about progression. According to dictionary.com, one definition of art is “the quality, production, expression, or realm... of what is beautiful, appealing, or of more than ordinary significance.” Another definition is the “skill in conducting any human activity.” In my case, those human activities are BMX riding and producing videos. I will continue to seek progression in riding, filming, and editing because BMX to me is art. - JS 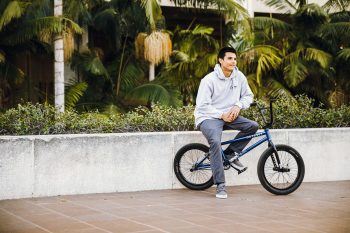 A Kink X Odyssey ride with a Doyle approved seatpost 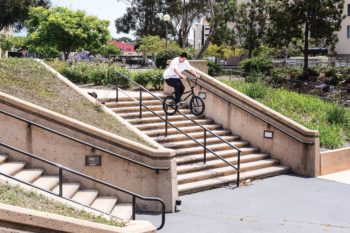