Clint Reynolds And His Slice Of DIY Paradise

Who doesn't dream of having this in their backyard?

If you took home a nice chunk of change from making the podium at a big bowl comp, what would you do with the winnings? Nutek rims for your ride? Luxury Caribbean vacation? Deposit it towards the down payment on a townhouse? If you're Clint Reynolds, you dump all the funds into building your own concrete bowl.

Armed with some contest winnings, additional savings, an insane work ethic, determination and zero experience with concrete work (though countless hours of experience with transition shaping) Clint went to work at his in-laws’ property in Upstate New York. Read on for all the trials and tribulations it took to get this beast together.

And quite a beast it is. Don’t let any photos or video fool you into thinking it’s smaller than it really is; that deep end is tall and steep. And it’s perfect. Read on for more details from Clint himself.

How did this bowl come about?

I always wanted to build a bowl. I went to the 2016 Van Doren Invitational bowl contest last summer and somehow got second place doing the half-bar, and all of a sudden had $7500 burning a hole in my pocket. I was about to get married in a month, and I asked my future father-in-law if I could build a bowl on his land. It was basically a test, like “Let’s see what this kid’s got.”

Who was involved in building it?

Mike, my brother-in-law, crushed it. He was there every day for four weeks. Dustin Younie was the only one with any kind of of experience working with concrete, and without him I'd probably still be working on the bowl, ha, ha. So many dudes stepped up and helped it was awesome; too many to name. I’m not from this area, so I didn’t really know anyone around. A buzz started happening about the bowl and dudes would just start coming out of the woodwork. The cool thing about building a bowl is that skaters are willing to come help, and you have a bigger community to help make mods.

How much did it cost in total?

Fifteen thousand dollars. That was everything I had saved from working and stuff. I didn’t want to spend that much, but that’s what it cost and I was in too deep. It was just enough. I was like, “I got a sick bowl, but now I gotta get a job.” No regrets at all.

How did some of the costs break down?

The concrete pump cost a lot. A thousand bucks a day. We shot the deep end in two days. It’s a big job just to run the pump. We got two bundles of one hundred pieces of rebar. We used about 60 yards of concrete, at $125 a yard.

Any issues with the construction?

I used a mini excavator, it took a good week (to dig out). There was a rock half the size of my van I had to dig out. It was like poking it with a toothpick. I had to dig way under and take one of the big-ass trees and jammed it in there, then grabbed the top of the tree with the excavator, and then levered and popped it out. I almost snapped that day. Figuring out all the details took a lot of work as well.

Was that the most difficult part of it?

That, and working the concrete. The concrete was drying so fast (on the first two days of the pour). I had no experience working concrete. Something crazy would go wrong every single day, but somehow we would figure it out. The aggregate was huge in the concrete the first day, and it clogged the pump. The guy didn’t clean the nozzle, and the next day, there were three concrete trucks lined up, and we’re just throwing mud up with shovels and it’s not happening. We had to take apart the pump, and we used a torch and a huge wrench. That was the most stressed I’ve ever been.

Anything you would have done differently now?

I almost wish we didn’t get a pump, and do it in smaller sections, and hand-stacked it.

This is the sight of enjoying the fruits of all that labor and stress.

"There was a rock half the size of my van I had to dig out."

Was there anything and/ or anyone that inspired you to build it?

I like building stuff in general especially stuff to ride. Looking at all the DIY skate spots over the years definitely inspired me. It was just something I've always been curious about doing.

Why did you go with this shape of the bowl?

It was slightly inspired by the first Empire bowl Corrigan built. I knew I wanted a hip and at least a 9ft roaster, and that's as big as I could make it with the money I had.

Does it ride as good as you hoped?

It rides awesome; so stoked how it turned out!

How was building the bowl similar/ different than building trails?

Building the bowl was a lot different for sure. Concrete costs money and dirt is usually free. Also the time restraints you have with working the concrete can be stressful. With dirt you can always shave or add dirt and its not a big deal, but with concrete you got one shot.

Your wife Jaime helped out with the bowl?

Yeah, she killed it!

She's skating it too?

She just started skating and is pretty stoked on it! It's sweet because I can still ride and hang with her at the same time; it's a two for one special.

Seems like most DIY concrete stuff is done by skaters; do you wish there was more done by bike riders?

It would be cool to see skaters and bikers work together more to build some sick shit.

Will you be spending more time away from Austin in upstate NY, now that you have the bowl to ride?

Any plans for expansion?

There are plans for sure! Just gotta make some money first! (Laughter)

Reynolds putting the back wall to good use while filming for his section in the new S&M video "Hot Dogs Who Can't Read".

"It would be cool to see skaters and bikers work together more to build some sick shit." 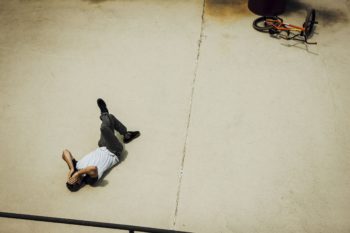 "I FEEL LIKE BMX WAS MY WAY OF SHOWING WHAT WAS IN MY HEAD." 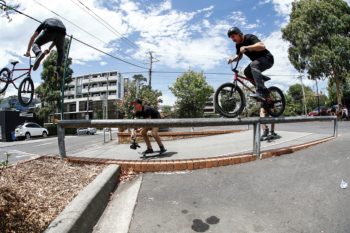 6 Months In Melbourne with Focal Point